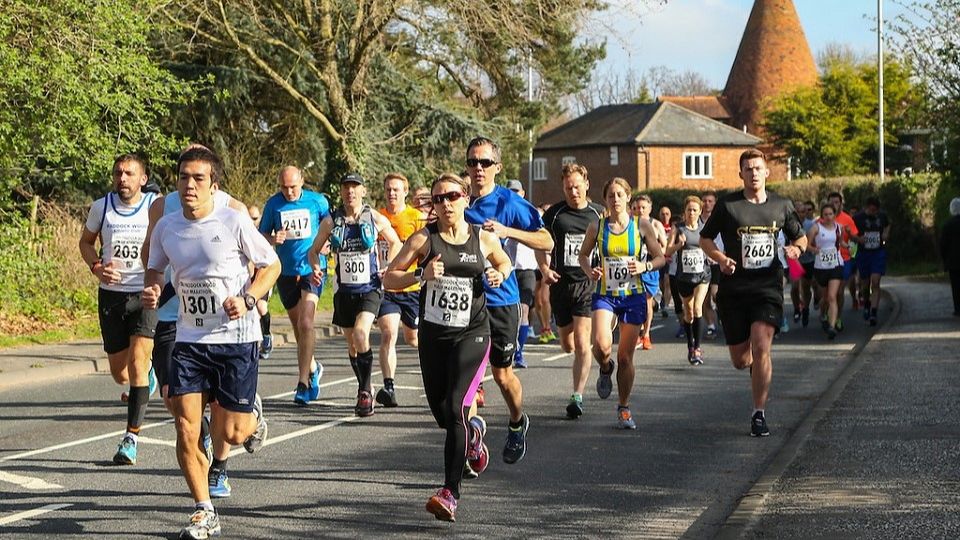 The men's course record fell but the women's narrowly survived as 1,261 athletes finished the
32nd Lambert & Foster Paddock Wood Half Marathon on Sunday 13th March. This traditional spring marathon warm-up was back in its usual slot after a Covid-delayed event in September last year.

The 2021 winners, in torrid conditions, were Nick Dawson (Worthing, 1:07:51) and Izzy Coomber (Lewes, 1:21:28). Six months later and those times were beaten by the top five men and the first four women in dull, overcast conditions on Sunday (our image is from a few years ago).

The men's race was dominated by Alexander Lepretre (Highgate Harriers, 1:04:38) who last ran a half marathon in 2014 (Bath, 1:25:10) so he has just sliced 20 minutes off his personal best while pruning 28 seconds from Frank Tickner's obstinate record from 2013.

Just over 180 runners beat 90 minutes with M40 Chris Fuggle, of Singapore Shufflers, marking that barrier with 1:29:55. There were almost 800 finishers in less than two hours and the timekeepers were stood down after 1,261 had crossed the line in 3:30:45.