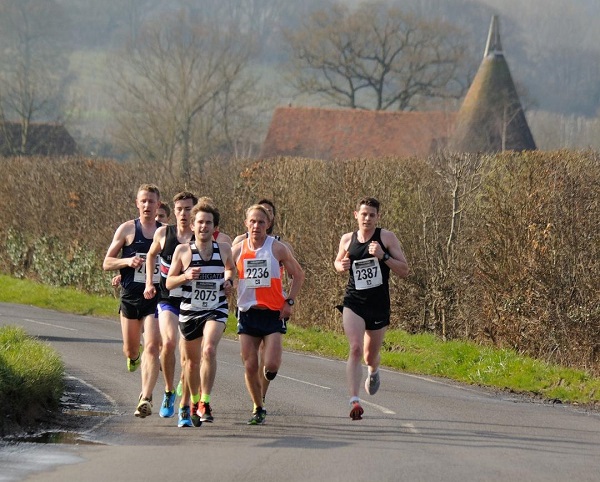 Paddock Wood meeting the needs of runners for 30 years

January is the perfect time to organise your training and racing programme, particularly if you want to complete a Spring marathon in fine fettle. For the past 30 years Paddock Wood Half Marathon has been providing the right race at the right time for marathon runners and mere mortals like runABC South correspondent Alan Newman, who previews the race on Sunday 7 April 2019.

Fast times permeate right down through the field at Paddock Wood, with many runners recording personal or season's best times on the flat, rural course through attractive Kent countryside. The unusual building in our event photo is an oast house, otherwise known as a hop kiln. Many of the redundant oasts around Paddock Wood have been converted into houses and are fine examples of vernacular architecture, having been used in the brewing process.

Barry Royden is one of the few men who have multiple victories on this course, with three wins between 1998 and 2004. However, female champions include the inaugural winner Sue Martin and Tina Oldershaw (five wins each).

Free parking is available at Mascalls School with less than a mile to jog to the start and the train station is just 10 minutes walk from the start in Eldon Way. For several years the race has supported the vital life saving work of the Kent, Surrey and Sussex Air Ambulance.

Regarding the milestone of the 30th anniversary, race director James Ridger says: "We have come a long way in 30 years. In our first race way back in 1989 we had 690 entries; this year 2750 people will have entered our race. This is testament to the organisation and hard work of everyone involved with the race, not only today but over the last 30 years".