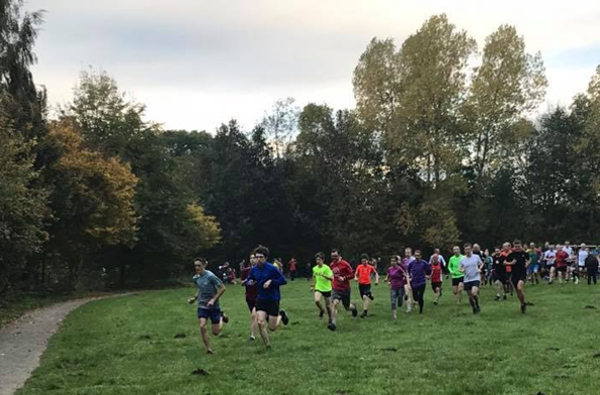 Oswestry parkrun off to a winning start

The Henley Wood parkrun, Oswestry made a successful debut with nearly 200 people turning out for the inaugural run. Jack Pickett continued his shining season with first place and a sub-18 finish.

Only two weeks after his win at the Sheepwalks Shocker 10K, the Wolverhampton & Bilston AC athlete was first home in 17:50 and thanked the volunteers for helping him to go under 18 minutes. He plans to return and improve on his time. Ruth Shaw of SYTri was the first female in 23:23.

Clapping, cheering and a cowbell encouraged a keen field of people who walked, jogged or ran around a two lap course of Henley Wood. The run was held on trail paths, grass and wooded areas making it a challenging run in parts that started and finished mid course. The autumn colours made a picturesque backdrop for this eagerly anticipated event that was the culmination of hard work and planning by everyone involved including Susan Bowes, the West Midlands parkrun ambassador and Shropshire Council.

There was a trial run on 6 October led by Event director Ellen Harrison that was enjoyed by those taking part. Feedback was positive, auguring well for the inaugural run yesterday (Saturday 20 October). A round of applause for the 27 volunteers whose enthusiasm and efforts made it a memorable day for all.

Oswestry joins Telford, Shrewsbury and Ludlow to make it four parkruns in Shropshire. The next Henley Wood parkrun, Oswestry is on Saturday 27 October at 9am.