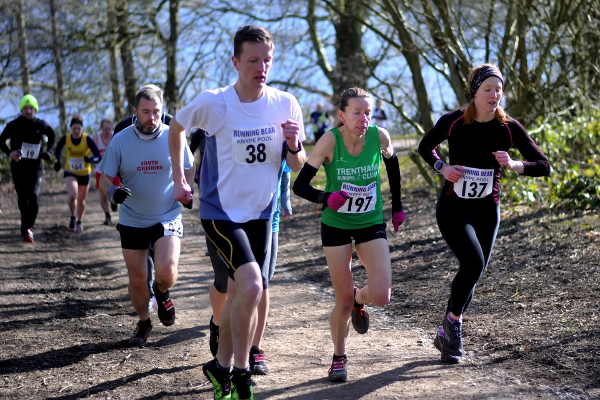 There was some rapid running on a cold and bright morning at last Sunday’s (25 February) Knype Pool 5 Mile Charity Race with the winner of the women’s race showing a turn of speed that matched her surname.

Nearly 200 runners negotiated an undulating multi-terrain route around Knypersley Reservoir near Biddulph in Staffordshire. This is an annual event with all proceeds donated to four charities chosen by the Mayor of Biddulph – Cheetham’s Children’s Ward (UHNM), Douglas Macmillan Hospice, Staffordshire Emergency Humanitarian Association and The Green Tree House Biddulph.

It was quick work by Simon Bailey of Mercia Fell Runners to win in 28:25. Jason Burgess of Trentham Running Club was second in 29:48 followed by Jack Ross of Staffs Moorlands AC in 30:14.

Trentham went one better in the women’s race with Wendy Swift claiming the top spot in 34:39. Natalie Stonell of East Essex Tri Club came second in 35:34 and Harriet Pickup of Boalloy was third in 36:42.

The last runner crossed the line in 1:20:49. A full set of results can be found on our race listings page.

This 5-mile race and 1 mile fun run were organised by Biddulph Running Club with a free park and ride service to and from the event courtesy of Hollinshead Coaches. This facility was arranged to reduce the risk of congestion at Knypersley Pool along with a request for people to car share due to limited parking. The race was chip timed and fully marshalled and all finishers received a memento and hot food not forgetting the ever popular charity cake stall with its confectionery delights.