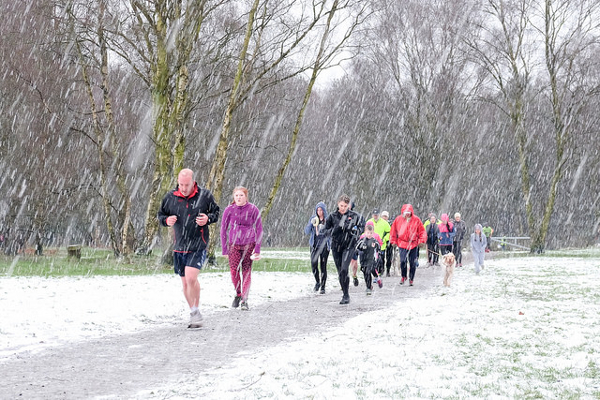 The runABC Midlands team has had the dispiriting job over the last few hours of putting 'RACE CANCELLED' signs against most of this weekend's planned races. The combination of the ‘Beast from the East’ and now Storm Emma has made for a grim picture across the Midlands. All races scheduled for this weekend (3-4 March) are affected by the weather conditions with many already cancelled or postponed and the remainder planning announcements later today / tomorrow.

Two night runs on Saturday are adversely affected by the weather. The Active Forest Sherwood Pines Night Run has been postponed until the 17 March. The National Trust Night Run Series – Attingham Park is hoping to go ahead but will assess the conditions before posting an update. In addition Saturday's Groundhog Marathon and Avalanche Run are off while elsewhere the Supernova Run London has been postponed until later in the year while the 2018 Mighty Deerstalker is cancelled.

The big early March charity event at Warwick (BHF Half Marathon) and the Resolutions Runs in Derby, Stoke and Watermead are all casualties of the weather. Late calls are being maded for the Action Heart 5 and Leicester Town and Gown 10K - organisers of these events are monitoring the weather and will make a final decision based on the Met Office forecast.

In Derbyshire the Bluebell Inn Fell Race and Ashbourne 10 have been cancelled.

Braunstone, Telford, Evesham and Northampton parkruns are just a few of this weekend's parkrun losses. Check the parkrun cancellations page for up-to-date information.

For more information about these and other events, visit our race listings section. In addition runABC Midlands will continue to publish updates via our Facebook and Twitter accounts.