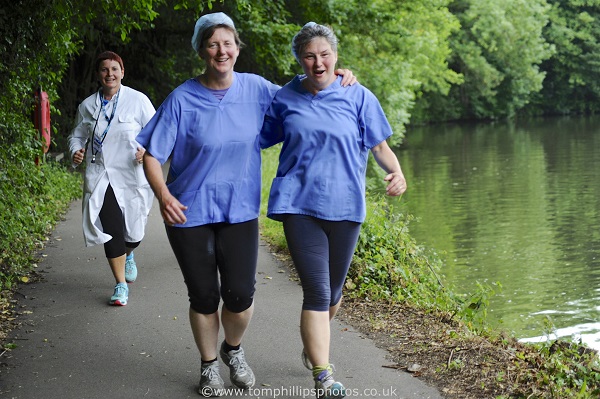 All Pain, No Gain For Alan at NHS70

Oh, the irony! As I struggled to walk with a swollen foot, sporting an ankle support, I felt like part of the furniture at Maidstone parkrun where I was volunteer timekeeper on Saturday morning (9 June) for the special #NHS70 run, writes runABC South reporter Alan Newman.

Trust me to go and sprain my ankle a few days before parkrun marked the NHS 70th birthday with over 360 celebration events held nationally. Despite the presence of so many healthcare personnel, I received no advice and very little TLC! However, a few well meaning parkrun friends did congratulate me on my authentic limp and pained expression!

Double Olympic champion Dame Kelly Holmes had launched 'parkrun for the NHS' a month earlier at her local Tonbridge event. The UK celebration of health and fitness aims to recognise the massive contribution NHS makes to the health and wellbeing of the nation and to inspire new participants, including NHS staff, to get involved in physical activity and volunteering.

Dame Kelly, a regular parkrunner, who worked as a nursing assistant before going into the British Army and later becoming a full-time athlete, said: “Increased levels of activity leads to improved mood, self-esteem and a wide range of health benefits. I know, from first-hand experience, how sociable and welcoming parkruns are, so it’s fantastic to see it join forces with NHS in its 70th year to encourage even more people to get active in this special year.”

In August 2017, parkrun conducted a UK survey of almost 2,000 healthcare professionals. More than three in five (63%) revealed they prescribed parkrun in some form, while 88% said they would consider referring users to parkrun.

Growing levels of obesity in adults and children is a major health issue for the NHS, as it can lead to a number of serious and potentially life-threatening conditions, such as type 2 diabetes, coronary heart disease, some types of cancer and stroke. Obesity can also affect quality of life and lead to psychological problems. The cost to the NHS of treating diabetes alone is around £10 billion every year – nearly 10% of the NHS budget. It is estimated that obesity is responsible for more than 30,000 deaths each year and that obesity could overtake tobacco smoking as the biggest cause of preventable death.

Donna Carr, Maidstone parkrun Event Director commenced her briefing with a request: “Hands up if you have ever used the services of the NHS”. When there was a less than 100% response she reminded us that we had all been born! A repeat of the question elicited the correct reply, followed by a spontaneous round of applause for the NHS representatives who were present.

As for the run itself, I am pleased to report there were no complaints regarding the times, especially not from first finisher Tom Carpenter (Vegan Runners, 15:57) – his first sub-16 in 255 parkruns (217 at Maidstone). Runners-up were Charles George (Paddock Wood, 17:59) and local runner Matthew Field (Larkfield, 18:46). The first three women were young Helena Scott (U14 Medway & Maidstone, 21:36) and over-50 masters Sara-Jane Terry (Sweatshop Community, 23:39) and Christine Spree (23:43).

The only negative for me was that after stopping my watch for volunteer tail walker Bryony Rathbone on 54:59 (420 finishers) I was too slow to get to the free cake table before all the goodies had been snaffled. There are many incentives to recover from injury setbacks and cake is right up there as one of them!