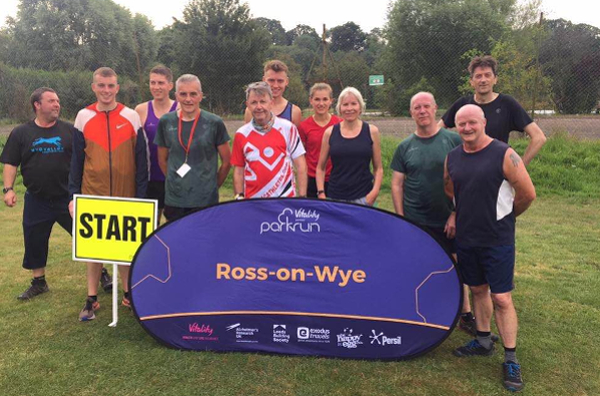 The inaugural Ross-on-Wye parkrun (3 August) was the perfect remedy for Saturday morning blues. Around 300 runners tried the cross country course including one lady who had a parkrun birthday.

Father and daughter Nigel and Cat Lane first thought of a parkrun in Ross-on-Wye four years ago. The idea came to fruition on Saturday 3 August after much hard work and commitment from people keen for it to succeed. The next question was: how many parkrunners would turn up?

Any fears proved to be groundless as 301 runners waited in the car park of the Sports Centre to listen to the briefing. Then away they went at 9am, along two and a half laps around the outside of the sports field near to the River Wye.

There were families, people with dogs, one guy running barefoot and Shelley Ellis of Lonely Goat RC who celebrated her birthday with a 5K. All of whom had the tantalising smell of bacon at the end of each lap to keep them going to the end.

Marcus Bennetto of Forest of Dean AC was first home in 17:57; Faye Johnson of Pont-y-pwl and District Runners was the first lady in 19:29.

Participants refuelled with tea/coffee and an ‘excellent’ bacon roll (or vegetarian equivalent) in the Sports Club.

The new parkrun has the honour of being linked with two GP surgeries in Ross-on-Wye as part of the parkrun practice initiative to encourage active lifestyles in their patients. Pendeen Surgery and Alton Street Surgery not only supported this new parkrun but helped to fund it along with other private donors.