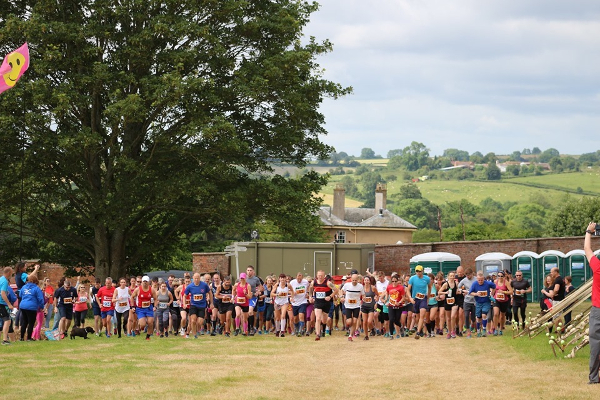 Turn up, tune in and run was part of the happenings at the Orbit Fitness Festival (28-30 June). Festival goers had the rare opportunity to experience a private, multi-terrain route at the new Hopton Court Trail Run.

Hopton Court, Cleobury Mortimer in South Shropshire was the location for the Orbit Fitness Festival. Held over three days there were fitness classes, workshops, presenters, therapies, live music and a DJ stage; bars and an artisan food court, a trade village and children’s entertainment. Summer arrived with a vengeance on Saturday with soaring temperatures before dropping to a comfortable level the next day.

The main event on Sunday was the new Hopton Court Trail Run with a choice of two distances – 5K and 10K both of which used an undulating course consisting of woodland tracks, meadows and narrow paths over streams. There were a couple of short hills.

This was billed as a social run and there was the option to walk the 5K; however, it was also a chance to race for a PB. There was a run briefing at the walled garden at 10.30am followed by the start of the 5K and 10K at 10.45am. The 10K runners completed the course twice.

All finishers received a medal before refuelling at the Festival bar and food court.

The Orbit Fitness Festival was voted a success with the organisers looking ahead to next year’s event. Super Early Bird tickets for 2020 will be available in July.