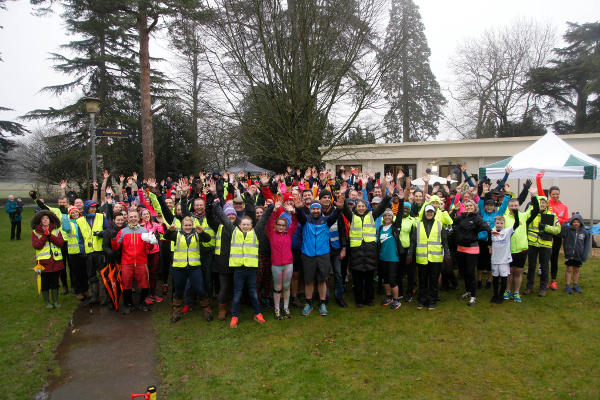 There were two reasons to celebrate at Cirencester (Gloucestershire) on Saturday 3 February beginning with the launch of its first parkrun. It was also the 500th parkrun in the UK.

This event was the culmination of four years hard work and planning not least the efforts involved in finding a suitable venue. The dream became a reality thanks to support from the Royal Agricultural University and the Bathurst Estate and the commitment shown by the volunteers. Together they ensured that the inaugural run was a great success with many vowing to be back next Saturday.

Spirits were high despite the damp, overcast conditions as 208 eager participants completed the new parkrun, following a flat course around the grounds of the University. Heading in a clockwise direction on an all-trail route they walked, jogged or ran three laps before finishing close to the main car park.

Run director Simon King and event directors Nicky Whelan and Sara Jeapes sang the praises of everyone involved in delivering a safe and enjoyable run.

Simon said: ”We were only able to host this event thanks to seed funding from Cirencester’s running clubs and other supporters. Thanks to everyone who contributed, we were delighted to see the event take place.” This acknowledgment was echoed by Nicky who added: "So many people have worked incredibly hard to bring this to fruition. Next week we go again and we can’t wait! We welcome everyone to come along and walk, jog, run or volunteer.”

It was close at the front of Saturday's field, so close that first and second fastest, Oliver Prtichard and Andy Gardiner both clocked 19:32. Quickest lady was Honor Paddock who set the female mark at 25:35. Kingfisher Harrier Alan Coombs recorded the midpoint time on 30:49 and the field closed on 1:02:50

It all happens again at the university grounds at Cirencester next Saturday (10 February) at 9am.