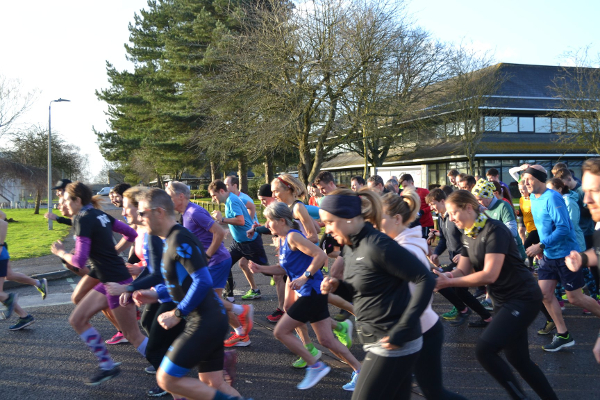 A fusion between the local running community and the core team resulted in the first Berkeley Green parkrun (Saturday 1 February) on the site of a former nuclear power station. Adam Holland was amongst the attendees who gave the fast course a thorough examination.

SGS Berkeley Green UTC was the venue for this inaugural parkrun on a dry and bright morning with 274 runners taking part, ably assisted by 36 volunteers. The hard work and commitment of Ian Cole and others reaped rewards with a mass of praise for the organisation, speedy course and the historic location.

The Berkeley Green campus is part of South Gloucestershire and Stroud College (SGS) and home to a cutting edge Science and Technology Park, built to educate engineers of the future. This multi-million pound development occupies the space of the decommissioned Berkeley nuclear power station nuclear power station. The campus also houses Bloodhound LSR – a project with the goal of breaking the land speed record.

There were some speedy performances on Saturday morning not least by Adam ‘Tango’ Holland of Tavistock AC. Adam put the flat, two lap route through its paces, racing along on fast tarmac paths around the campus. He and the others was guided by cheerful marshals as they battled a headwind and finished outside the entrance to the college canteen.

The organisers hope their first event will trigger a chain reaction or in the words of Ian Cole: “Let’s do it all again next Saturday and the Saturday after and every Saturday – forever!”