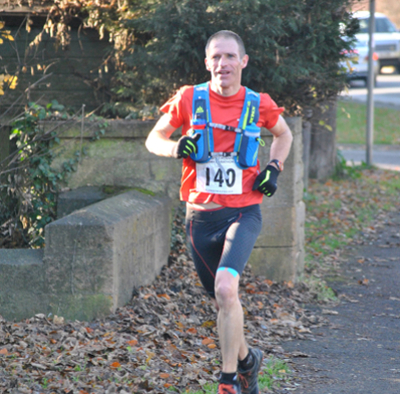 Neil Wicks came tantalisingly close to breaking the course record as he raced to victory at Sunday’s (18 November) Broadway Marathon and Half Marathon. This was his second attempt to make his marathon mark.

Wicks had two objectives – to win the Broadway Marathon and smash the existing course record of 3:20:00 set by Rob Forbes in 2015. He had tried before but without success; yet the Stratford-upon-Avon AC runner was determined to beat it. He almost achieved it, crossing the line 40 seconds outside the record to win the 26.2 mile race in 3:20:40.

In the half marathon, Marc Heptinstall of Malvern Buzzards RC was the winner in 1:43:15. Paul Atkins was second in 1:43:29 and Jon Mansfield of Tewkesbury RC third in 1:46:43. Claire Murphy won the women’s race in 1:54:52 narrowly beating Sheila Lammas of Stratford-upon-Avon AC who was second in 1:54:56. Laura Pettifer of Kenilworth Runners was third in 1:59:47.

The Broadway Marathon and Half Marathon was organised by Cotswold Running. The race usually presents a hilly, muddy and slippery challenge although conditions underfoot were an improvement on previous years. Glorious weather and stunning late autumn colours formed an attractive backdrop to a well organised event that was enjoyed by everyone. Race director Kurt Dusterhoff summed up a successful day: “We appreciate the friendly runners and amazing volunteers who made it a joy to put on.”