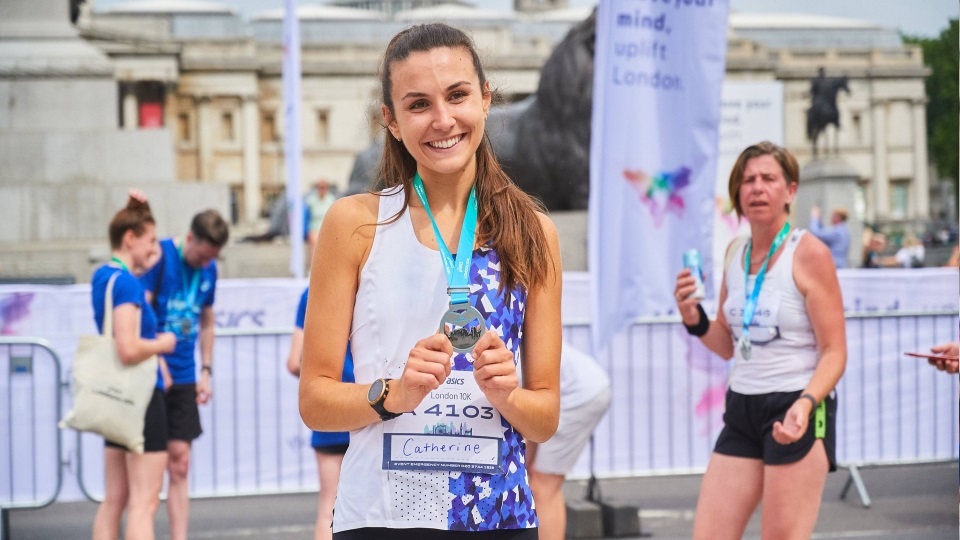 Catherine Hill looks pretty pleased with her medal and excellent finishing time of 41:17 for the ASICS London 10K on Sunday (25/07). She should be proud of finishing 330th from a huge field as 7,902 completed the course to mark the safe return of live, mass participation events for organisers LimeLight Sports Club.

It may have been 'Magic Monday' in the Tokyo Olympics but it certainly was 'Medal Sunday' for thousands of race-starved runners on closed roads in the capital. Unusually, the start line was open for two hours and there was one continuous wave start, with runners allocated a specific 30-minute window within which to arrive before starting their race.

A dozen bands and DJs kept runners entertained and pace runners were embedded within the pack at various start times to boost motivation. In short, this was almost back-to-basics mass events fare with a healthy serving of safety on the side and how the athletes responded!

A blistering pace was set by the top three men and when chip times were consolidated it was a victory for Andrew Heyes (Hallamshire Harriers, 29:25) from 2019 champion Josh Griffiths (Swansea Harriers, 30:05) and Scott Overall (Blackheath & Bromley Harriers, 30:26).

There were plenty of GB internationals at the sharp end as 240 runners managed better than 4min/km pace for sub-40 minutes time and a massive 1,670 beat 50-minutes.

To celebrate the success of ASICS London 10K the LimeLight Sports Club Membership scheme has been launched and entries to all 2022 events opened exclusively to members for a limited time, with Founding Member savings of up to 60% or £33 on 2022 races.