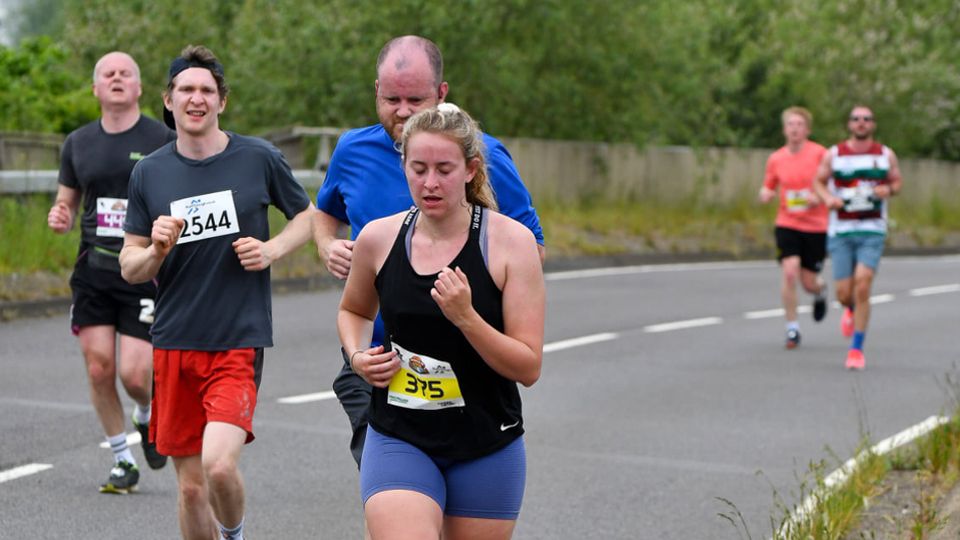 Hot, smiling faces at the first Northampton 10K (Sunday 6 June) from RunThrough as runners of all abilities made the most of the fast and flat course on closed roads. The PB-chasers were ready to go full steam ahead on a single lap around Northampton followed by their moment of glory in Sixfields Stadium.

Sixfields Stadium is the home of Northampton Town Football Club who play in League 1 of the English Football League (EFL). The start and finish of the 10K were located within the stadium – an added bonus for any football fans amongst the runners. For others, taking part in a live event after months of lockdowns was a reward in itself.

Starting pens and colour coded waves were in operation and each runner was allocated to one of these according to their predicted finishing time. The first wave (red) for sub-42 minutes runners went off at 9am followed by the other nine waves at intervals. Out of the stadium, follow a single lap around the town before heading back to the stadium and the finish.

Daniel Connolly of Telford AC won the race in a time of 30:56. James Bellward of the Royal Air Force AC was second in 31:33 and George Phillips of City of York AC third in 31:42.

Georgina Schwiening of Cambridge Runners was first female in 33:36 and with a gap of more than four and a half minutes between her and Kelly Barnett of PGC1 Coaching who finished second in 38:03. Jessica Cocker of Cambridge and Coleridge AC was third in 41:52.

There were 966 finishers. A full set of results is available via the RunABC Midlands Race Listings page.