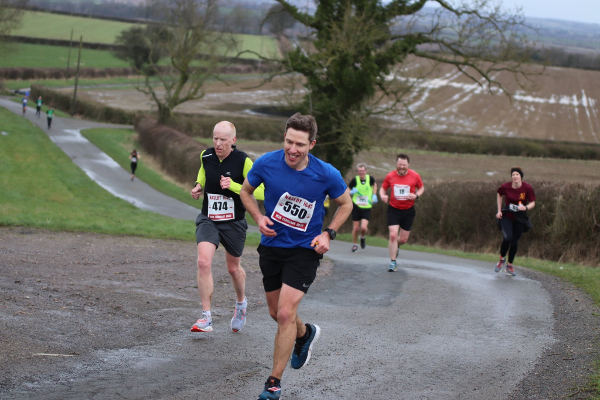 There was nothing cavalier with the organisation at the Naseby 1645 on Sunday (16 February) as Race Harborough went above and beyond to prepare for extreme weather. The participants had to fight Storm Dennis and Dick’s Hill in one day.

The Naseby 1645 is unusual in that the distance is 16.4 miles as well as being named after the last battle of the First English Civil War. This was a crucial victory for the Roundheads led by Sir Thomas Fairfax and Oliver Cromwell over the Royalists; the battle was fought near the village of Naseby in Northamptonshire.

Northamptonshire was the host for a modern day struggle between the forces of nature and an army of more than 500 runners ready to give Storm Dennis a bloody nose.

Pre-race information and regular updates meant participants were fully aware of the conditions and could plan accordingly. An expert team of marshals and car park volunteers did their utmost to ensure everyone had a safe and enjoyable event.

The race started at 9am as runners headed off along a scenic, challenging course on roads before reaching Dick’s Hill at mile 10. This was followed by 6 miles of climbs and descents and the route included several landmarks.

Claire Fitzpatrick of West End Runners was the winning female in 1:53:16 followed by Kirstie Sharman of Bedford Harriers in 1:55:12. Emily Clarke of Trent Park RC was third in 2:02:39.

Finishers were battered but unbeaten and were rewarded with a distinctive medal, post-race nutrition from Premier Protein and a T-shirt (optional extra).