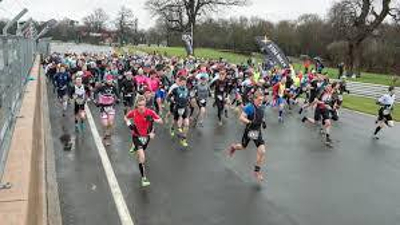 It was an action-packed day on the track at the Oulton Park Half Marathon & 10K yesterday (Sunday 16 February) where runners had a testing time as they battled gale force winds around a course open to the elements.

Sharp bends, tight corners and undulations characterised the Oulton Park Circuit that has seen touring cars and motorbikes speed around this famous track. They have the capabilities to cut through winds unlike the runners who had to work extra hard as they completed 4.3km laps at this multi-choice race from OP Events.

Their options were a Half Marathon, 10K and a 3.5 Hour Challenge and for those runners who are keen cyclists as well there was a Super Sprint and Sprint Distance Duathlon.

Then Storm Dennis arrived at the weekend and threatened to put the brakes on the runners' goals. Competitors in the duathlon were advised not to use deep section wheels on their bikes due to the conditions.

Chris Pownell of Knowsley Harriers AC had entered Wrexham Half Marathon but after this was cancelled, found an alternative at Oulton Park. He put his foot down to win the Oulton Park Half Marathon in 1:15:29. Gemma Mallett of Croft Ambrey AC won the women’s race in 1:27:48.

In the 10K, Steve Forsyth of Presblyn RC sped across the line to win in 35:39. Alison Reid of Northern Masters was the first female in 43:23.

Storm Dennis managed to cause a problem with delivery of the medals that are now due on Monday.