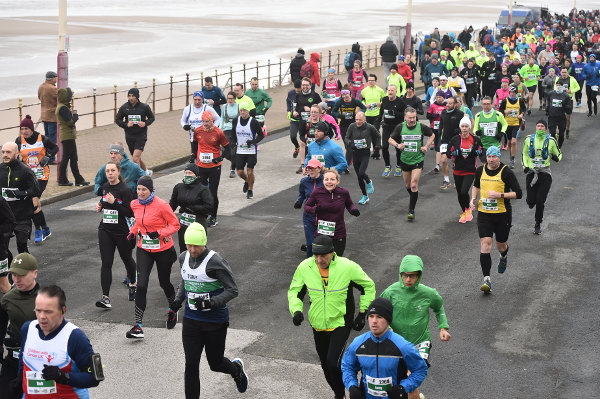 Going with the wind at Great North West Half

Sea breezes are usually expected at Blackpool but the seaside town was hit by a weather bomb at Sunday’s (16 February) Great North West Half Marathon so it was time for Great British Grit at the coastal race.

Blackpool was rocked by gales as Storm Dennis left his mark on the UK at the weekend. However, there was determination in spades as runners and marshals presented a united front at the 31st Great North West Half Marathon organised by Fylde Coast Runners.

This half marathon is advertised as good preparation for Blackpool and London Marathons both of which take place in April. It is also a PB-potential race although not on Sunday when the main concern was to avoid being blown over while running!

The event director posted a weather update on 11 February confirming the race would go ahead and that they were ready for anything. They also mentioned that it would be tough running conditions...

It was certainly bracing as runners followed a two lap, flat course along the front. There were tail winds between the North Pier and Bispham for an early extra boost. But runners had to face a wall of wind on the return journey!

The organisers congratulated the runners on toughing it out in fierce conditions saying: “You are all awesome”.