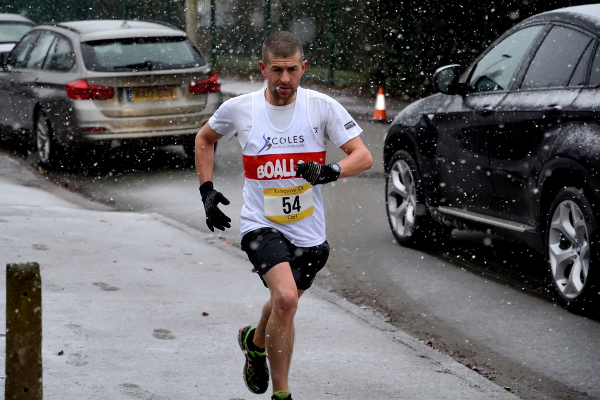 The rapidly worsening conditions didn’t stop Carl Moulton and the first wave of runners from slip sliding their way around Sunday’s Kidsgrove 10K (21 January). It was about weathering the storm until the finish.

Carl Moulton of Boalloy RC was first across the finish line in 36:42, over a minute and a half ahead of his teammate Dan Hibberd who came second in 38:12. Ben Bewley of Newcastle AC was third in 38:38.

Lucy Holt went one better than her second place finish at the Staffordshire Cross Country Championships a couple of weeks ago. The Notts AC athlete won the women’s race in 41:13 followed by Phillipa Steele of Stone Master Marathoners in 41:46. Sophie Goodfellow of Newcastle AC came third in 44:15.

There were two waves of runners with the sub 50 minutes group heading off at 10am to be followed by the over 50 minutes group at 11am. However, the weather had other ideas. A biting wind, snow and freezing temperatures meant that the organisers, Gold Events, had to make a decision about whether to continue. A discussion took place between Gold Events, the race director, St John’s Ambulance and UK Athletics Race officials with everyone agreeing to cancel the race (second wave) in the interests of safety.

All the runners who collected their numbers for the 11am start will receive a full refund. In addition to this, the organiser has offered to set up an informal run of the Kidsgrove 10K route next Sunday and everyone who joins him will be able to collect their medal and memento afterwards.

Gold Events wishes to thank all the marshals and volunteers for their hard work in very challenging conditions.