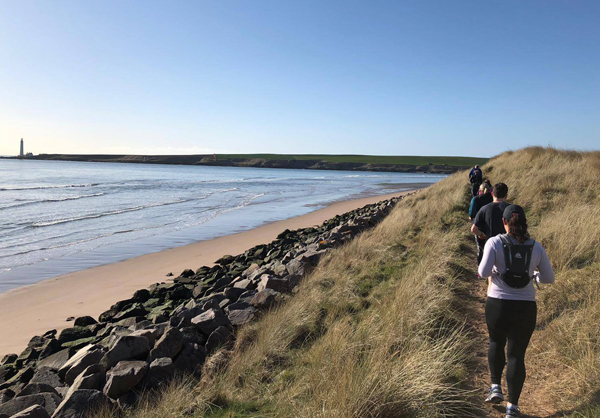 As running continues to increase in popularity in Scotland (witness the development of parkrun with four new events in recent months, the continued influence of jogscotland and a burgeoning race calendar), a number of new clubs have been established. One recent arrival is Montrose Flyers.

The club was set up in 2017 after local runner Michael Loudon was frustrated because of limited running opportunities in the Angus town. The group is now 30+ strong, meets for regular runs from Montrose Sports Centre and has affilliated to the Association of Running Clubs (ARC).

The Flyers, the name is inspired by the geese that visit the town each year, have also set up an 8-event club championship which got underway on Saturday (1 June) at Brechin Pageant 5K. The series continues at Forfar Hill Race, and includes Dundee Half Dram and the Great Aberdeen Run before concluding at Lochore 10K in October.

The Flyers have recently taken possession of club vests and are looking forward to appearing en masse at local races and at Montrose parkrun in their new green tops. They have already organised a Flyers takeover of the town's Saturday morning 5k run and the club is the most active at Montrose parkrun with nearly 800 runs recorded by members.

One big plus for the new club are a number of great local routes including scenic coastal runs (see photograph above). They have also been proactive in finding out what their members wanted to get out of their running via a Survey Monkey online questionnaire.

The Flyers are active on social media on Facebook and Twitter. Visit those pages to find out more about the club and their activities. You can also contact the club by email: hello@montroseflyers.run