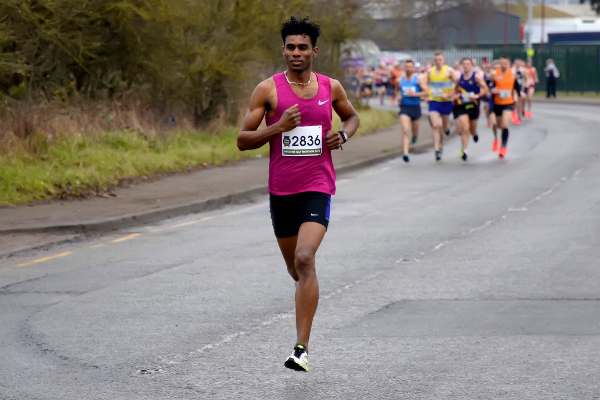 Mohammed Abu-Rezeq rises to the top at Wrexham Bakery Half

Altrincham AC’s Mohammed Abu-Rezeq was cooking on gas at the Village Bakery Wrexham Half Marathon yesterday(Sunday 17 February). as he led the way in a quality field at this classic road race.

The event contained all the ingredients of a highly competitive race, namely a fast, flat course that was chip timed and expertly marshalled. It incorporated the North Wales Half Marathon Championships and the organisers included cash prizes for the top three men and women – in addition to those for the main event.

Around 2,400 runners were ready and waiting for the 11am start of this popular half marathon that has been supported by the Village Bakery for more than 20 years. The route consisted of a large 8 mile lap and a short 5 mile lap and a lack of elevation and assistance from the team of pacers meant the strong likelihood of a PB.

A strong performance from Mohammed Abu-Rezeq of Altrincham & District AC saw him win the 2019 Village Bakery Wrexham Half Marathon in 1:07:34. Joe Rainsford of Heanor RC came second in 1:08:42 with last year’s winner Tom Charles of Trafford AC third in 1:09:57.

There was a double celebration for Laura Riches of Leigh Harriers & AC who was first female in 1:19:39 and posted a PB as well. Amie Bagnall of Prestatyn RC was second in 1:22:16 followed by Emma Crowe of Wrexham AC in 1:23:42.

This year’s race saw a record number of entries and a new HQ at the ‘Gluten Freedom’ site courtesy of the Village Bakery. The medal featured the Welsh dragon and the motto “Cymru am Byth” or “Wales forever!” and there were Welsh cakes and crumpets for the finishers.