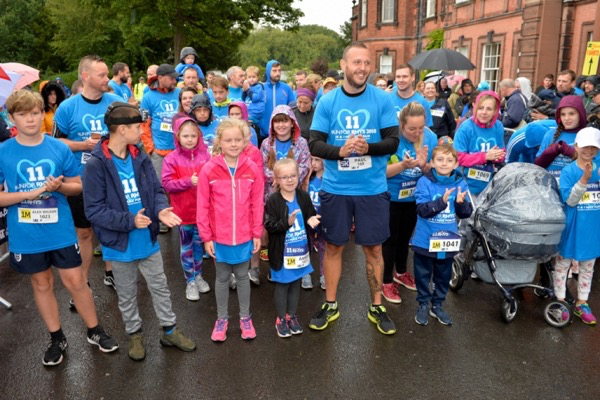 Merseyside turns out in force for Rhys Jones

Torrential rain failed to dampen the spirits of more than 500 runners who took part in an event that celebrated the life of Croxteth youngster, Rhys Jones. The second annual Run For Rhys, which included a 1 Mile and 5K Fun Runs, took place in the grounds of the Croxteth Hall and Country Park estate on Sunday (26 August).

In 2007, Rhys was walking home after football training in Croxteth and was shot after being caught in the cross-fire between two rival gangs. The inaugural Run For Rhys event was staged just a matter of days after the 10th anniversary of his tragic death.

For the second staging on Sunday, both fun runs were officially started by the Deputy Lord Mayor of Liverpool, Councillor Peter Brennan, and Everton FC ex-player and club ambassador Ian Snodin. The Everton FC anthem Z Cars was followed by a minute’s applause to celebrate Rhys’ life.

Runners of all ages pulled on their trainers and braved testing weather conditions to honour the memory of Rhys. They were joined on the start line for the second year by Rhys’ parents, Mel and Steve Jones. Mel took part in the 1 Mile Fun Run, while Steve ran the 5K.

The event, created by the Rhys Jones Community Centre, is organised in conjunction with BTR Liverpool. It provides a platform to raise much-needed funds to allow the centre to continue its vital work in the local community, assisting young people in areas as building enterprise,raising aspirations and improving health and well being.

Sharon Jardine, a director of the Rhys Jones Community Centre, commented: “We can’t thank everyone enough for taking part in the Run For Rhys, despite the torrential rain. Watching families cross the finish line in heavy rain with big smiles was just priceless.

“This shows that Rhys very much continues to be in people’s hearts and minds. It was incredibly special to have Rhys’ parents, Mel and Steve, take part for the second year.”