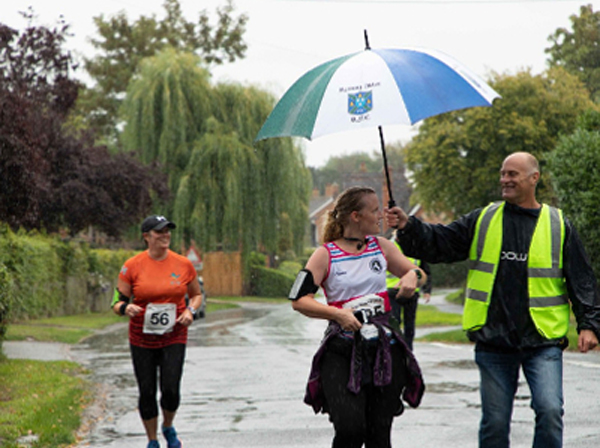 Andy Coward proved chivalry is not dead at the Pershore Plum 10K on Sunday (26 August). This cheerful marshal used his umbrella to shield one female runner from the worst of the weather.

Andy was part of a group of friendly, supportive marshals who encouraged the runners as they battled cold, wet conditions at this 10K multi-terrain race in Worcestershire. He greeted each runner with a smile and in a courteous gesture, ran alongside a female runner whilst protecting her from the rain with his Reading Abbey RFC umbrella.

Organised by Pershore Plum Plodders the event attracted a field of almost 300 runners who were rewarded for their stoicism with a medal, technical T-shirt and a goody bag that deserved its own award. The race started at Pershore Leisure Centre before continuing along the High Street, over the river then out into the countryside before heading back to Pershore. They finished in Abbey Park with the Anglo-Saxon Pershore Abbey as an imposing backdrop.

Marcus Mumford of Evesham Vale RC was first to cross the line in 35:01; he was nearly three minutes ahead of James Head of Tewkesbury RC who finished in 37:51. Mumford’s teammate Stewart Reading was third in 38:49.

Shona Crombie-Hicks of Tewkesbury RC won the women’s race in 39:42 and was fifth overall. There was a gap of several minutes between her and Jen Cashmore who was second in 43:10. Tamsin Bowden of Evesham Vale RC came third in 44:11.

If Carlsberg did goody bags they’d be those handed out at the Pershore Plum 10K. They contained cider, lager, chocolate, water and a banana and last but not least a plum.