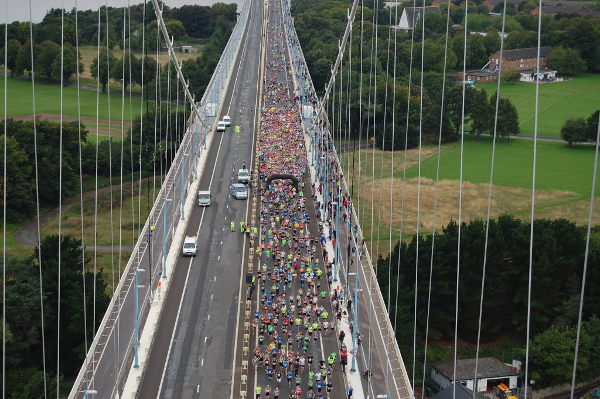 Runners soaked it up over the Severn Bridge

Over 2,000 runners were exhorted to 'get it done' by an enthusiastic supporter at a wet and windy Severn Bridge 10K and Half Marathon on Sunday (26 August). His encouragement helped them through the storm...

An early taste of autumn awaited entrants in the 10K and Half Marathon as they lined up, ready to go on the Welsh side of the Severn Bridge. Conditions were challenging with torrential rain and strong winds preventing people from enjoying the scenery but not the event itself which has become a ‘must do’ in any runner’s diary.

Returning for the fifth time – the Half Marathon was voted the ‘Best New Race’ in the Runner’s World 2015 Personal Best awards – with 1371 finishers in this year’s race. The race started at 9am on the mid-section of the bridge and continued along the closed M48 motorway towards England and around country lanes before heading back over the bridge and the finish.

There were 806 finishers in the 10K that started at 10am from the eastern carriageway of the M48 and was held almost entirely on the bridge. Simon Gallimore of GRIT Fitness was the winner in 36:13 with Katy Roy of Chepstow Harriers the fastest female in 41:05.

Entrants in both races faced a sharp hill at the half way point; however, they were given a welcome boost from a man in a deckchair outside his house, who even though he was wet through, urged them on in their efforts. This kind gesture was appreciated in particular by one runner who went on to achieve a half marathon PB.