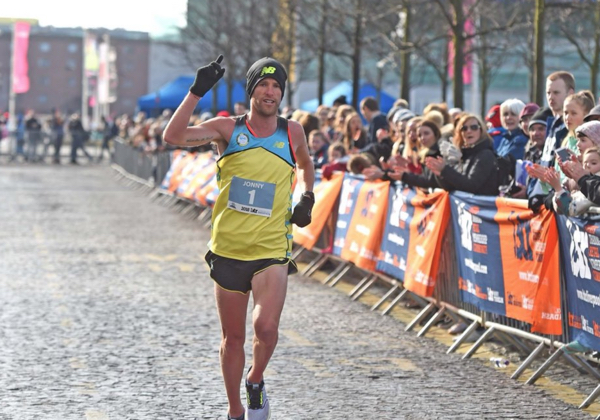 With a bespoke medal and T-shirt designed to mark a quarter century of racing, fine spring weather and close to 5000 runners competing across the 13.1 and 10 mile distances, Merseyside celebrated the 25th year of its favourite half marathon in appropriate style.

Both races started and finished under the gaze of the Liver Birds at Pier Head Liverpool, an iconic backdrop to showcase the city set against the Three Graces – the Royal Liver Building, Cunard Building, and Port Of Liverpool Building. The course featured some of Liverpool’s most famous sights including Liverpool Anglican Cathedral, Princes Park, Sefton Park, Otterspool Promenade, Albert Dock Liverpool, and Museum Of Liverpool.

First to claim the commemorative medal was Liverpool Harrier Jonny Mellor who continued what has been an impressive 2018 with victory in 1:03:35, close to four minutes ahead of clubmate Dejene Gezimu (1:07:25) with Alistair Rutherford third in 1:10:36.

Reflecting on the day’s proceedings, BTR Liverpool race director Alan Rothwell said: “The 25 anniversary Liverpool Half Marathon is quite a milestone and what a fantastic day it’s been. The running market has massively grown in recent years – so it’s testament to the event and its fantastic history that it’s stood the test of time.”

Some post-race comments have suggested that the course may have been short of the 13.1 miles and BTR Liverpool has released a statement regarding the issue: “As many of you will know there were recent enforced changes to the course due to ongoing road works in the first mile and as a consequence I undertook the changes myself which is why I’m sure they were true to the required 13.1 mile distance.

“Having undertaken a dummy run last week over the 10 mile course and found it to be accurate I have no reason to doubt the 13.1 mile distance either. It is likely that the course will be reviewed again in light of these recent changes and it is possible the full length of the Strand as far as Upper Parliament Street will be used next year so a full course will be undertaken.”