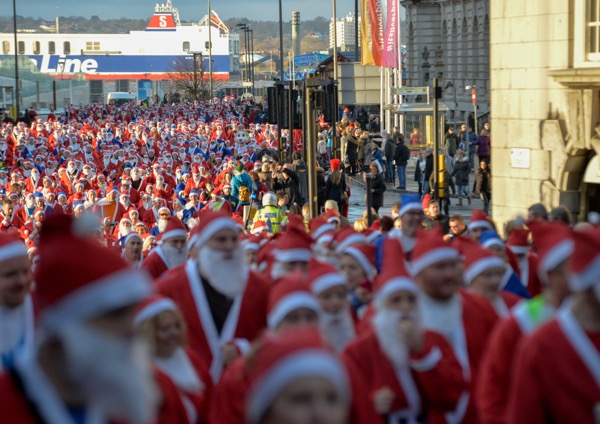 Mersey Santas back Help The Animals this Christmas

Merseyside runners will be part of a major national festive charity campaign next month. BTR Liverpool’s Santa Dash have been named as the official event partner for Channel 5’s high profile Help The Animals at Christmas initiative, which showcases the work done by the RSPCA, Scottish SPCA, Blue Cross, The Donkey Sanctuary and Wildlife Aid Foundation.

In a first of its kind, national television station Channel 5 will host the event that raises money specifically for animal charities, culminating in a live show on Friday 21 December at Salford’s Media City.

The show will feature special episodes of Channel 5 favourites, which have teamed up with one of the five charities to highlight their amazing work, including Ben Fogle’s New Lives in the Wild, The Yorkshire Vet, The Dog Rescuers with the cast of Neighbours, and Jo Brand’s Kitten Rescue.

The BTR Liverpool Santa Dash yesterday (Thursday 8 November) confirmed they would be backing the campaign as its official fundraising event partner. Santas taking part in the UK’s biggest festive fun run are invited to support the campaign and five animal and welfare charities by raising cash while they dash.

BTR race director Alan Rothwell commented: “We are incredibly thrilled and honoured to be the official fundraising event partner for Channel 5’s Help The Animals at Christmas charity campaign.

“Christmas is ultimately a time for family and friends, but as a nation of animal lovers we have a duty to support those who cannot ask for help themselves. The BTR Liverpool Santa Dash is a real highlight of the festive season and I encourage all our Santas to Help The Animals this Christmas.”