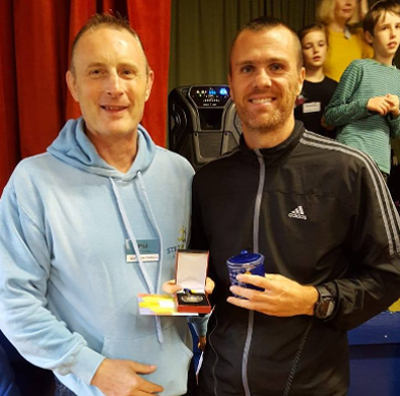 Niall McNamara and 451 runners ran a cracking race at Sunday’s (14 October) Stilton Stumble 10K in Nottinghamshire as they passed through the spiritual home of cheese-making.

Now in its sixth year, the Stilton Stumble is a 10K road race that starts and finishes in Cropwell Bishop, famous for its Blue Stilton. The rain didn’t stop the field heading off at 10am travelling past the Memorial Hall, up to Colston Bassett then Owthorpe before turning right and back to Cropwell Bishop. The race was held on country roads with a few small inclines and views across the scenic Vale of Belvoir countryside.

There was a water station at the half way point manned by cheerful volunteers who, in spite of the biblical conditions, urged everyone to 'run for the cheese'. The thought of Blue Stilton spurred Niall McNamara on to victory, crossing the line in 37:24. Greg Spellman of Wellingborough & District AC wasn’t far behind him, finishing second in 37:51 with Peter Twigg of Clowne RR third in 38:00.

Christine Heaton of Holme Pierrepont RC was in commanding form, winning the women’s race in 43:08. She is a stalwart of this race having supported it for many years and has made more than one appearance on the podium. Kim Duffy of Sleaford Striders AC was second in 43:32 followed by Christine’s teammate Aimee Palace in 44:15.