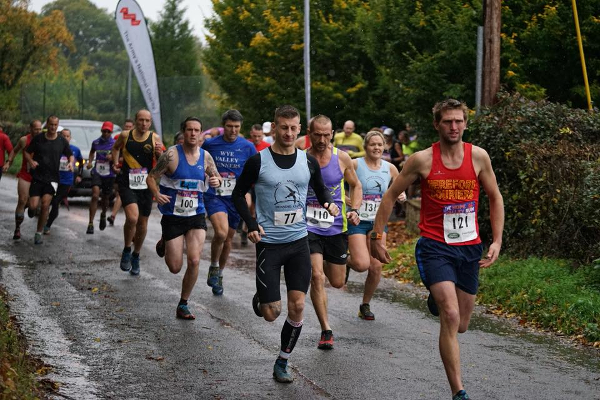 Matt James was first across the line at last weekend's Hope Valley 8 Run (14 October). His reward was the locally famous bacon and sausage sandwiches.

Actor/comedian Perry Benson, star of You Rang, M'Lord? and Benidorm, took time out from his busy schedule to act as the official starter of this scenic, multi-terrain race in Herefordshire. Heavy rain made for tricky conditions underfoot but the attractive route and supportive marshals made up for the less than ideal weather.

Matt of Hereford Couriers won in 53:31 followed by Mark Lamonby of Croft Ambrey RC in 53:48. Craig Collier of Ludlow Runners was third in 57:52.

Croft Ambrey RC went one better in the women’s race with Kelly Bowen the first female in 1:07:09. Joanna Eddy was second in 1:08:10 with Clare Mallender of Hereford Couriers third in 1:10:10.

The Hope Valley Run was set up in 2005 by Veronica Francesca Scully who was training for London Marathon and fundraising on behalf of the Dyslexia Society. She used the woodlands for her training runs; an area that was largely unknown to runners in the area and as a result of this, she and her husband devised a route for an 8 mile race. This was meant to be a one-off race but has grown in popularity since then and raised money for various charities. ABF, the Soldiers Charity is the current beneficiary with all proceeds donated to them.

There were medals for the finishers along with bacon and sausage sandwiches from Sally and Joe Brandt. The organisers would like to thank the following sponsors: Pork and Two Veg (refreshments), Heritage Landrover (advertising) and The Butchers Arms who provided a two course lunch for all the helpers.