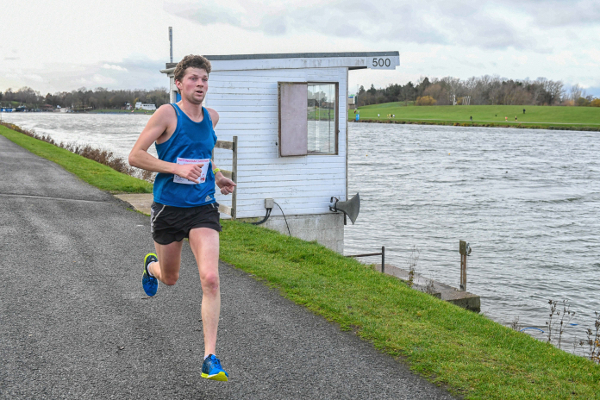 Winning debut for Nick Martin at Nottingham Christmas Half Marathon

Nick Martin ran a cracking race to win the Nottingham Christmas Half Marathon on Sunday (2 December). He also set a new course record on what was his first attempt at the distance.

The Australian triathlete and member of Caistor RC had never run a half marathon before and chose Nottingham as the place to test himself over 13.1 miles. He is no stranger to victories, PBs or course records: a 30:58 at the Doncaster 10K (25 November), 32:42 at the Caistor Sting in the Tail 10K (8 July) and 31:17 at the Gainsborough & Morton Striders 10K (25 March) are amongst his growing list of achievements.

Nick joined over 460 half marathon runners on a damp, mild morning at the National Water Sports Centre, Holme Pierrepont in Nottingham on the second day of a festive weekend of running. There was a marathon on Saturday followed by a half marathon, 5K and 1 Mile Fun Run on Sunday at the event organised by Time2Run Events UK.

The half marathon consisted of four full laps and a part lap on a fast, flat course around the Water Sports Centre. Nick was first across the line in 1:10:59 and broke the existing course record (1:14:06) by more than three minutes.

Samantha Harrison was the fastest female in 1:23:46 and and knocked almost three and a half minutes off the women's course record (1:27:12).

There were new male and female course records in the marathon, 5K female and 1 Mile female.

Every finisher received a bespoke themed medal, free photos and a Christmas stocking full of goodies.