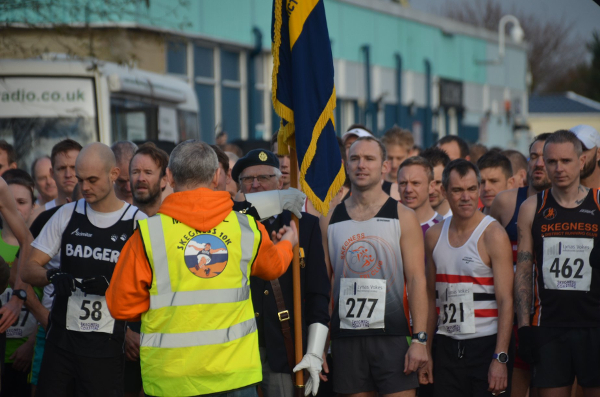 Generosity of spirit from runners at the Skegness 10K

There was a large turnout at Sunday’s (2 December) Skegness 10K in aid of the Royal British Legion and this wasn't the only altruistic gesture on the day.

The Lincolnshire seaside resort of Skegness, location for the first Butlin's holiday camp, is the venue for a popular race that fundraises for a different charity each year. It has raised thousands for the Air Ambulance, Alive and Kicking and the RNLI Skegness with the Royal British Legion Skegness this year’s recipient. A worthy and appropriate choice of charity as this year, the nation has been commemorating the First World War Centenary.

Organised by Skegness Coasters RC, the 10K started and finished at Butlins Caravan Park with one road connecting it with the Skegness Water Leisure Park. There was a last minute issue regarding the lead cyclist; however, John Irving came to the rescue and took on the role, earning the gratitude of the 10K committee.

Claire Cooney was the first lady in 39:17 with Wendy Mullineux of Trentham RC second in 39:59. Judith Broadbent of Lincoln Wellington AC was third in 42:11.

A feature of the event was the superb medal based on the 100th anniversary of the First World War along with the fact there are several RAF bases in or near Skegness. It is one of the best we've seen and was described as 'beautiful' by many of the runners.

One runner was representing his club for the first time but was taken ill and collapsed at 6 miles. His teammates went to his aid and supported him as they passed him over to St John’s Ambulance. He was kept in hospital overnight for observation before being discharged the following day. He vows to return next year.

Image (above) courtesy of Barry Robinson. 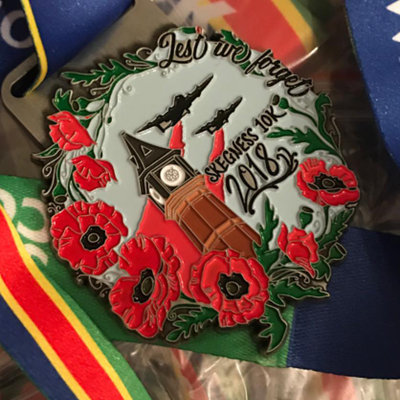