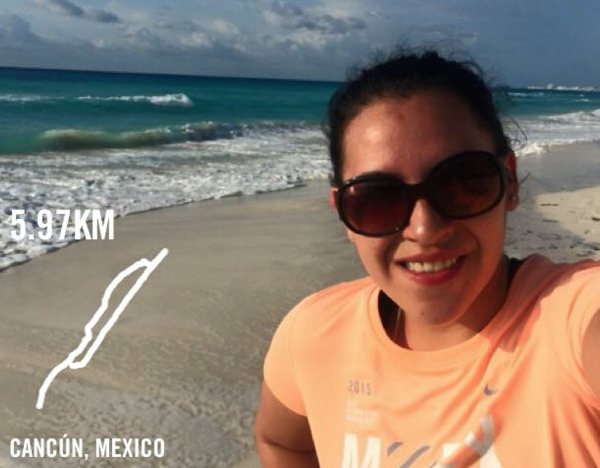 The appeal of one of the North West's top road races has been confirmed as worldwide with one runner, Claudia Calderón Canseco, making the journey from Mexico to compete at the UKFast City of Salford 10K on Sunday 9 September.

Claudia will certainly bring an international flavour to the event next month when she swaps the training spots of Cancún to return to a city that she fell in love with a few years ago. The possibility of combining a trip to Manchester with rediscovering her joy for running was an opportunity she couldn’t pass up.

Speaking to runABC North, Claudia told us: “I have been to Manchester a couple of times – I just love the people and the environment, everyone is so welcoming that I feel part of the city after just a few hours of being there.”

Claudia continued: “I started running again in July after a break and I noticed that the City of Salford 10K would fit in perfectly to a return trip to Manchester. I did a bit of research on the race and it had all of the features I was looking for—atmosphere, fun and lots of different people. I can’t wait to see the city in a new light when running through it!”

Claudia will be part of a 3,000 strong field that will tackle a course that moves from the MediaCityUK Piazza and follows a route around Salford Quays and Trafford Park before crossing the bridge back into MediaCityUK to the finish line.

The impressive course has a big selling point for the 10k since it launched in 2008 and has been one of the reasons it now stands as the North West’s premier road races. Entries for the City of Salford 10K remain open and are priced at just £21 (£19 affiliated runners) – registration is available here.