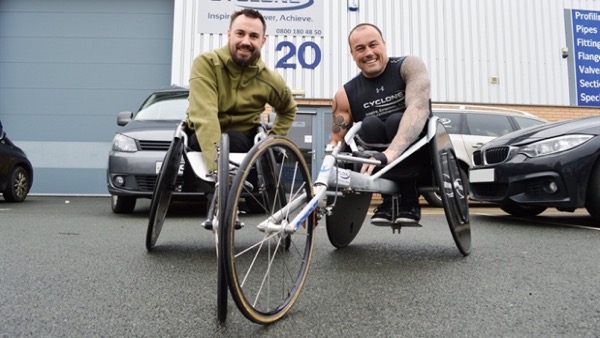 Martin Hibbert (left), a 41-year-old man who was left paralysed from the waist down after the Manchester Arena bombing, is set to tackle Simplyhealth Great Manchester Run on Sunday 20 May, almost a year to the day of the attack. For Martin, who will be competing in a racing wheelchair, the 10k is a further challenge in his pursuit of raising an incredible £1 million for charity.

Martin suffered a T10 complete spinal injury as he stood just 10 metres away from the bomb when it detonated. His injuries were described as the equivalent of being shot 22 times at point blank range. His daughter, Eve, was also seriously injured in the attack.

On Sunday, Martin will be present at the start line in Manchester with former Paralympian Richie Powell and best friend Lee Freeman, and is aiming to complete the 10k in under an hour. Commenting on the Manchester event, he said: “Anyone who knows me knows how determined I am. It's going to be a huge challenge for me to use my arms to push myself around the course, but I will do it.

“With it being so close to the anniversary of the attack, I just had to come and take part in the Simplyhealth Great Manchester Run. I want to show the terrorists that they aren't going to stop me doing anything and it has in fact made me even stronger and determined to prove them wrong.”

Martin’s incredible determination has also led him to set up the Martin Hibbert Charity Foundation, for which he aims to raise £1 million for the hospitals that saved his and his daughter's life. The money will go to the Royal Manchester Children's Hospital, Salford Royal and Southport Spinal Unit – the places he credits with saving both his and his daughter’s lives.

The Simplyhealth Great Manchester Run will take place just two days before the anniversary of the attack; one minute's silence will be observed as a mark of respect to the victims.