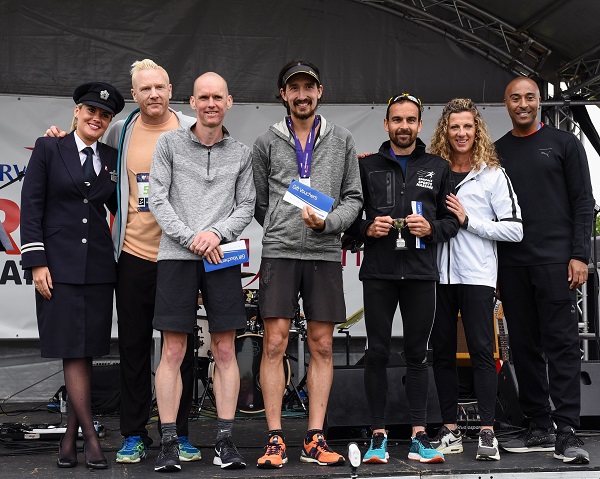 Some new races take a while before making their mark on the running events community. Others come flying out of the blocks and seem to arrive fully formed. British Airways Run Gatwick is very much in the latter camp, with 3150 confirmed finishers in the hugely successful inaugural event on Sunday (13 May).

Crawley's Southgate Park was packed with athletes, their supporters and personalities from the sport for the first British Airways International Half Marathon, 5K and Family Run. The warm spring sunshine and vibrant British Airways BASE CAMP and fan zones got visitors young and old involved in the fun of race day.

It was certainly an exciting day for British running fans with Colin Jackson CBE starting the International Half Marathon; Iwan Thomas MBE starting the 5K before proceeding to run the race himself and Sally Gunnell OBE starting the Family Run. Iwan and Sally also took part in the pre-race warm-up, much to the delight of the competitors.

The Half Marathon was a thrilling race with small margins separating the winners. Neil Boniface (M40, Crawley) and Adam 'Tango' Holland (Notfast RC) ran neck and neck until the last 800m, when Boniface managed to prise a precious 10 seconds for victory in 1:09:00. Holland's 1:09:10 was a huge PB by 3:27! Third place went to Daniel Robinson (1:09:52 PB).

The women’s race went to the wire and was decided by a sprint finish. The judges placed Hayley Manning (Clapham Chasers) marginally ahead of Amelia Brown (Crawley) as both shared 1:27:34 – a big PB for Brown. Natalie Mccreath (Eastbourne Rovers AC) was third in 1:31:54. There were 2201 finishers in 3:48:27.

The Family Run was a popular part of the event and saw over 550 participants of all ages cross the finish line in front of the festival stage. Sean Doyle, British Airways’ Director of Network and Alliances, said: “We are delighted to have partnered with Run Gatwick on this race which has been a great success and enjoyed by all.”