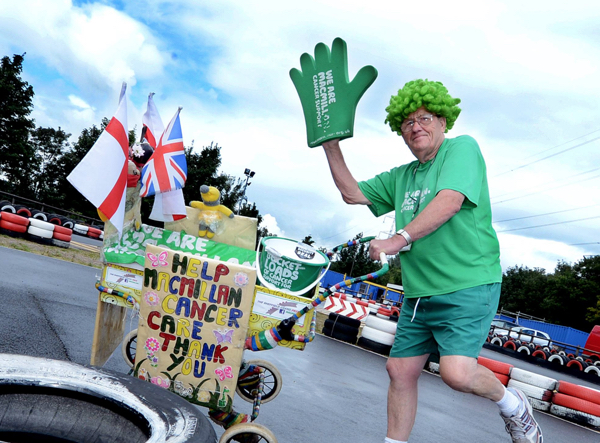 For 25 years, John Burkhill has travelled across the UK to race with his famous pram and green wig. Now, the man who is affectionately known as the 'Mad Man with a Pram' will complete his 1000th event when he toes the line at Sheffield Half Marathon next month (Sunday 8 April).

Since embarking on his racing adventure, which began in 1967 and has included 16 London Marathons, John has been raising money for MacMillan Cancer Support – a charity very close to his heart after the sad passing of his wife, June, in 1992.

On his fundraising aims, John commented: “I have raised money for a handful of charities but my mission is to raise £1m for MacMillan Cancer Support. The way they looked after my wife was special. I wouldn’t like to guess how much I’ve raised so far, but it is safe to say it's somewhere between £500,000 and £750,000.”

The race in Sheffield is special to John. In 1992, he pushed his wife, June, around Sheffield Half Marathon - a fortnight later she sadly passed away. “It was always a lifetime ambition for her to get a finisher’s medal. The atmosphere was terrific - it was as if she’d won.”

If you would like to secure a place along side John at Sheffield Half Marathon you can register here.