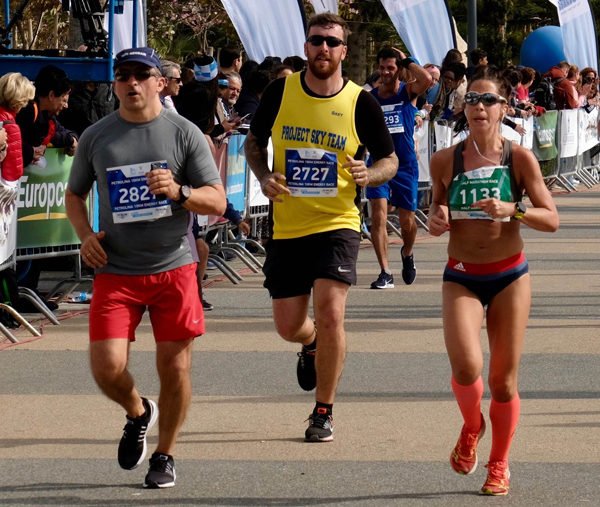 A big contingent of British runners including groups from UK Run Chat and Run Mummy Run enjoyed warm (if breezy) conditions at Sunday's OPAP Limassol Marathon GSO and there was success for Gemma Hockett who ran a PB of 1:26:19 to take second place in the accompanying half marathon.

The men's race was a one-sided affair with Simon Kiprugut Kirui (Kenya) leading from the start. When he broke the tape on 2:18:28, he had to wait fifteen minutes to congratulate second-placed Serhii Popov (2:34:23 ) from Ukraine. Anatoliy Bondarenko (also Ukraine) was third in 2:38:59.

Olivera Jevtic from Serbia won the women’s race in a time of 2:44:26, ahead of Simeonova Radosveta who finished in 2:50:18. 40-year-old Jevtic said the event was a good test for her ahead of this year's European Championships in Berlin.

A record field enjoyed a flat, fast and straight course along the Mediterranean coast and were supported by a team of international pacers led by experienced British pacer Paul Addicott - so many were happy, like Gemma, to record PBs.

Marathon runners benefited from a new and improved course which took them along a scenic coastal route as far as the ancient city of Amathus.

In the half marathon the women’s field was dominated by Elena Danilova from Russia who secured the title in 1:17:24. Gemma Hockett (1:26:19) was second and Irish runner Hannah Howard third (1:28:24).