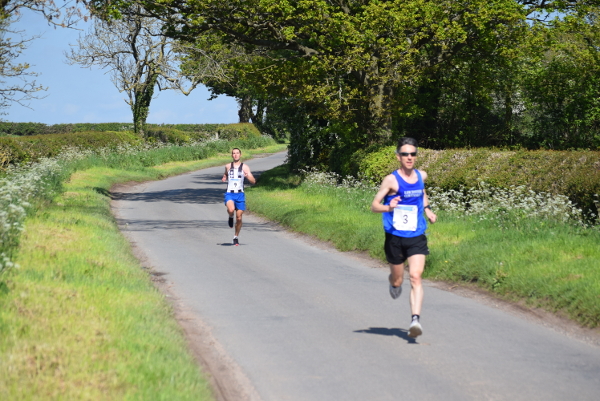 Victory for Renou & Hutton at Bosworth Half Marathon

The only battle taking place at Bosworth was between runners and the two hills at mile 9 and 11 at Sunday’s (12 May) Half Marathon. Ludovic Renou beat them to be crowned the champion.

Over 800 runners took part in Bosworth Half Marathon and a further 200 in the KeepTheBeat Mile. Organised by Desford Striders RC it incorporated the Leicestershire & Rutland A.A County Championship as well as being a member of the Leicestershire Road Running League (LRRL), adding an extra competitive element to the race.

Market Bosworth Water Trust was the venue for this well established half marathon that had something to offer every runner whatever their ability or experience. There was the historic connection, i.e. the 1485 Battle of Bosworth Field - the last conflict in the Wars of the Roses and where Richard III was killed: an undulating/ hilly route around the beautiful Leicestershire countryside: outstanding marshals who kept everyone safe while providing key support at vital stages in the race and a generous prize list including £100 for a new course record.

Professor in Economics at Queen Mary University of London and a lover of fine food and drink, Ludovic Renou of Leicester Coritanian AC was the winner in 1:13:35 and the men’s County Champion. Anthony Woodward of Hermitage Harriers was second in 1:13:57 with Simon Allen of Owls AC third in 1:15:06.

Catherine Hutton of host club Desford Striders was the first female in 1:26:41 and the women’s County Champion. Katie Lomas of Charnwood AC came second in 1:28:37 followed by Jess Necchi of Race Hub in 1:33:29.

There were gold, silver and bronze medals for these top three men and women and a collectable Battle of Bosworth themed medal for all the finishers.