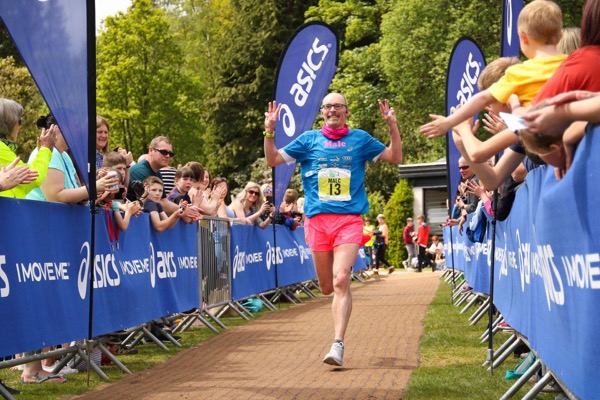 The 13th ASICS Windermere Marathon brought with it a record breaking day with the fastest ever performances across both fields. Combined with this was the addition of a 5k, plus the finale of the iconic Brathay 10in10, which made for an action packed weekend (19 May) of running at picturesque Windermere.

Over 900 people took part in the 26.2 mile race, which took runners from the front lawn of Brathay Hall, and through a demanding route around England’s largest lake via Hawkshead, Newby Bridge, Bowness-on-Windermere and Ambleside.

On what was a marathon debut she will never likely forget, Mary Hammond claimed the women’s title and a course record with her time of 3:02:56 – four minutes quicker than the previous best set in 2009. Reading Road Runners’ Rob Corney also managed to set a new fastest time at the race, coming home in 2:29:55.

For 16 of the runners it was their final marathon in a series of ten as part of the gruelling Brathay 10in10. Tony Hooper returned for his third 10in10 and ran each marathon in under 4 hours making him the fastest with a cumulative time 35:13:34. The men’s record is still held by Adam Holland who, in 2010, ran all marathons in 30:20:54.

To cap the weekend off, there was also a new addition to the festivities, the ASICS Windermere 5K. Kirkby Milers’ Rop Pope took the men’s title in 17:34, with Glaxo Hoad Hill Harriers’ Lauren Booth the top female runner in 22:40.

The combined participation across the events, around 1200 runners, will help to raise invaluable funds for the Ambleside-based Brathay Trust. The youth charity works with 7,000 young people in the north of England every year.

Brathay’s Head of Fundraising, Scott Umpleby said: “Our running events are bucking national trends, we saw record numbers signing up for the marathon and one of the largest fields to enter the 10in10. Thank you and congratulations go to all who took part in our biggest fundraiser.”