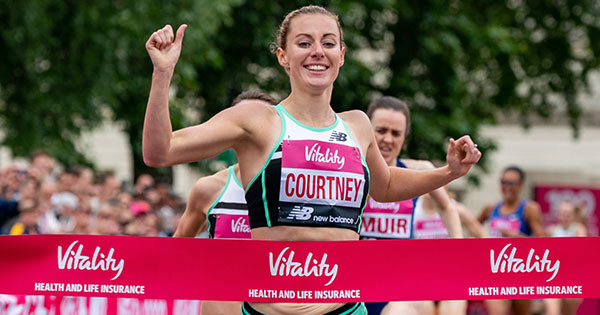 Both holders successfully defended British Championship titles in the Vitality Westminster Mile on Sunday (26 May) but neither race went exactly to the anticipated script. Chris O'Hare retained his grip on the men's gold but narrowly failed in his bid to run the first sub-four-minute mile in this event and Melissa Courtney unexpectedly held onto the women's trophy.

Laura Muir was not only the hot favourite to lift the Diane Leather Trophy in the women's mile, the UK record of 4:17.06 was widely believed to be on borrowed time. In the event a relatively tactical opening 800m and a blustery wind against the athletes on Birdcage Walk put paid to any record ambitions and an enthralling race was played out.

Defending champion Melissa Courtney was looking strong and took the initiative in the final 400m, just as Muir deployed her head bob that usually precedes an unanswerable sprint to victory. The final corner in front of Buckingham Palace was crucial as Courtney used her course knowledge to cross the line first in 4:31, with Sarah McDonald (4:31) second and Muir (4:32) third.

Muir had only returned from altitude training in Switzerland the previous day but readily acknowledged Courtney and McDonald were simply better on the day: “I wanted to win but it’s OK at this time of year with a long season,” she said. “I had a break after the indoors and trained very hard at altitude.”

Poole AC athlete Courtney was delighted to retain her title: “I’m delighted but a little shocked. I felt strong but the wind was tough and everyone was sitting behind me but I finished well.”

The men's race featured a pace maker, Tom Marshall, but the fickle wind looked to be blowing O'Hare's record attempt off course, too. However, the doughty Scot dug deep into his considerable reserves to fight off a late surge from surprise package Jonathan Davies.

Both athletes appeared to duck under the finish gantry in 3:59 but road times are rounded to the nearest second so they jointly share the new course record of 4:00 – so close! Elliot Giles (4:01) was an excellent third in a thrilling finale after making much of the early running.

More than 9,000 people ran in over 30 'waves' on the spectacular course around St James' Park, starting on The Mall. Perhaps the most fun was had by elite couple Steph Twell and Joe Morewood, who broke the Guinness World Record for the mile while holding hands (4:50)!