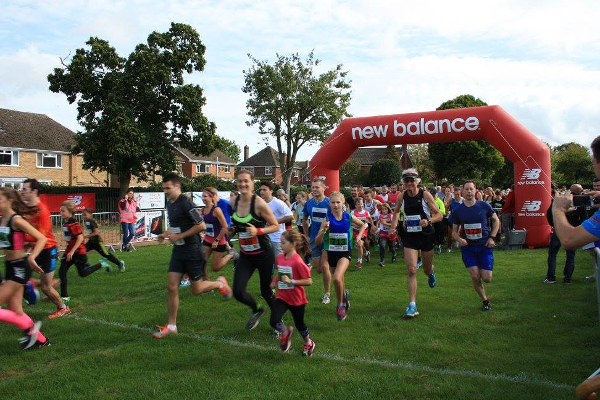 There was a record turnout at Sunday’s (23 September) Balsall Common Fun Run as the community came together for the Lily Mae Foundation.

The fifth outing for the Balsall Common Fun Run was marked by the biggest number of entries to date as over 700 people walked or ran around this commuter village in Solihull. They had the choice of 5K or 10K (adult, junior, teams) along with 400m Mini Runs for nursery and primary school age children.

The event was organised by the Lily Mae Foundation, a charity who provide support to parents and families following a stillbirth or neonatal death and bereaved parents and families were amongst those taking part. The charity were set up in 2010 with the aim of creating a lasting legacy to the parents of Lily Mae and many others who have experienced the loss of a baby. The charity also hopes to change public perception of stillbirth and neonatal death.

The Fun Run was held in conjunction with the University of Warwick and started and finished at The Heart of England School in Solihull. The theme was ‘walk, jog, run or race’ with the latter proving very popular with youngsters in the mini fun runs.

In the 5K, Junior Alex Adams was first across the line in 18:13. Andy Ryder of Coventry Godiva Harriers was the highest placed adult, finishing third in 19:41. Emily Mulholland of Team Embrace 1 was the first lady in 22:58.