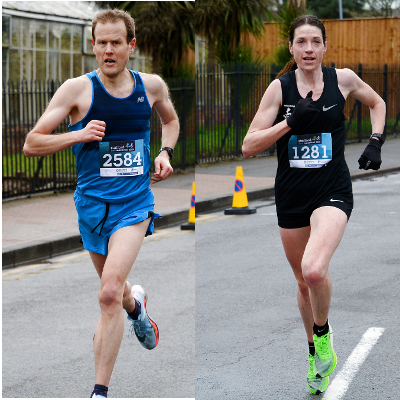 Biddell & Butler in charge at Stafford Half

There were runaway performances from Lloyd Biddell and Kelly Butler as both raced to victory at Sunday’s (15 March) Stafford Half Marathon. For Kelly, it was a successful title defence and a quicker time than last year.

Runners were diverted along the A34 Stone Road due to flooding on the Isabel Trail underneath the Eccleshall Road Bridge but apart from that, the route was the same as before. This well-established event was organised by Freedom Leisure in conjunction with Stafford Borough Council; they made a few changes based upon feedback from last year, i.e. reducing single use plastic.

More than 1,800 runners took part in the 37th Stafford Half Marathon – a drop in numbers compared to 2,800 in 2019, concerns about coronavirus an obvious factor. There was a 1 Mile Fun Run at 10.10am in the Market Square.

Runners defied the wet weather and virus concerns and were helped by plenty of support from local residents as they headed out of town and into the surrounding areas.

Lloyd Biddell of Mercia Fell Runners was in the leading pair at two miles and powered his way around to win in 1:08:24. Matthew Kotara of Trafford AC was in contention with Biddell early on in the race but couldn’t sustain it and finished second in 1:11:53. Craig Pilsbury was third again in 1:11:58.

Kelly Butler set the pace from the front, closely followed by Telford AC’s Claire Martin. Butler of Birchfield Harriers looked strong as she raced across the line to win the women’s race in 1:18:45 – knocking almost 6 minutes off her 2019 time. Claire Martin was second in 1:19:31 and Tracy Hinxman third in 1:21:39.