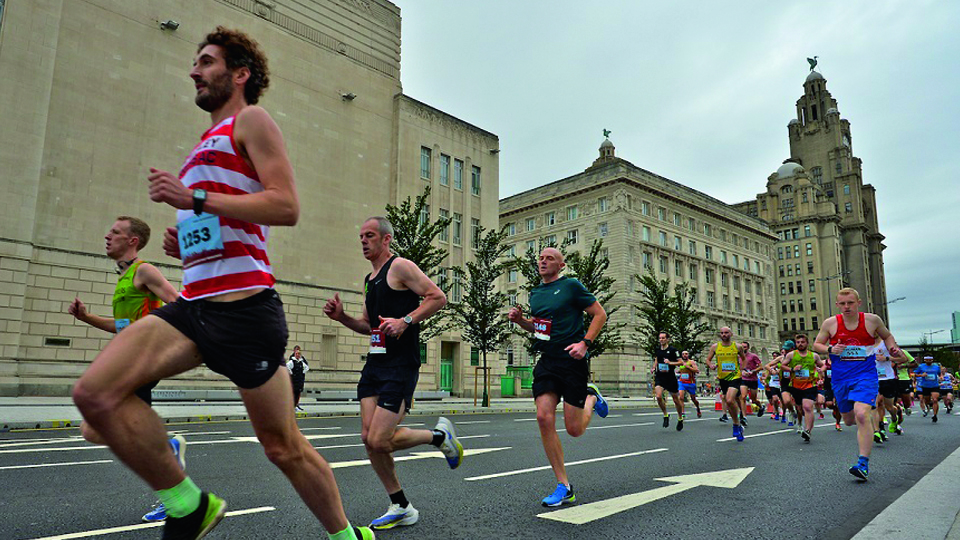 Liverpool's long-established half marathon was back at the weekend with 1000 runners taking to the city's streets...

More than 1,000 eager runners laced up their trainers at the weekend to take part in the biggest road race Liverpool has seen in 18 months. The 28th annual BTR Liverpool Skyline Half Marathon is a highlight in the race calendar given its long established roots and Sunday's event (12 September) also featured the sixth 10 Mile Road Race.

As previously reported by runABC, Southport runner Paul Warrington, 45, was taking part in the half marathon dressed in full hockey goalkeeper kit to attempt a Guinness World Record. On the day Paul was accompanied by fellow Southport & Waterloo Athletics Club runner Tracey Barlow and unfortunately didn't set a new record – but he did smash his charity target for Cancer Research UK raising more than £1,500.

Another runner with a tale to tell is 55-year-old Stephen Symons from Quays Running Club in Manchester who has taken part in every Liverpool Half Marathon, making this his 28th year. Stephen suffered a brain haemorrhage in November 2012, but still completed the race in March 2013 accompanied by family. He is already looking forward to next year when the race returns to its usual March date – and is excited for a landmark year in 2024 when the race marks its 30th anniversary.

Making it a hat-trick of extraordinary gentlemen was 83-year-old John Courtney from Liverpool who was the event's most senior male runner. This was his 111th half marathon and he guided his blind son James during the race.

The half marathon was won by Thomas Rogerson from Liverpool Harriers AC in a time of 1:11:22 while first place female was Fay Hughes from UTS Running Club in 1:24:00. Joseph Turner from Cambridge & Coleridge AC was first place male in the 10 Mile event in 54:33:00 and first female was Amy McKechnie from Queensbury RC in 1:6:17.

BTR Race Director Alan Rothwell commented: “The runners came out, the medals were shining, and there were plenty of smiles from start to finish. We staged the same race exactly 18 months ago just before the first national lockdown, and everyone has been through such a challenging time since. We feel extremely privileged and relieved to bring headline races back to the city.

“We’re now incredibly excited and counting down the days to five further events in 2021, including the BTR Mersey Tunnel 10K on 26 September and the festive spectacular Appreciate Group Liverpool Santa Dash on 5 December. Races have most definitely returned, let’s get back out there.”

The date for next year’s BTR Liverpool Skyline Half Marathon and 10 Mile Road Race is already confirmed for Sunday 27 March 2021 and entries are already open.

But next up in the BTR race portfolio is the 15th BTR Mersey Tunnel 10K on Sunday 26 September and you can still enter here.