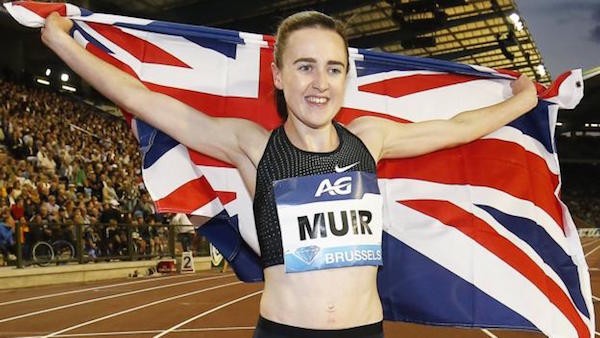 After what can only be described as an incredible year, Laura Muir has been named Female Athlete of the Year for the second time in a row at the Scottish Sports Awards.

The European champion and Diamond League final winner over 1500m, who also won two medals at the World Indoors in 2018, was given the honour at the Team Scotland awards earlier this month.

But it wasn’t entirely Laura’s night. As Female Athlete of the Year, the middle-distance runner was automatically put forward for consideration as the ‘2018 Scottish Sportsperson of the Year’. In the end the Lonsdale Trophy went to swimmer Duncan Scott.

Laura’s coach Andy Young was also short-listed for Coach of the Year, but the award went to Duncan Scott’s coach, Steven Tigg, the guiding force behind numerous Commonwealth and Glasgow 2018 medals.

Laura’s ‘golden moment’ in the 1500m at the European Championships was also short-listed in the Sporting Moment of the Year category.

Fellow middle-distance runner Jake Wightman was shortlisted for Male Athlete of the Year after a thrilling year, including a bronze medal in the 1500m at the Gold Coast Commonwealth Games.

The body behind the awards known as the ‘Scottish Sporting Oscars’ is Commonwealth Games Scotland.

‘From athletes performing at the highest level to the organisations helping people take their first steps into physical activity, the individuals and teams short-listed [for the Awards] represent the absolute pinnacle of achievement in sport.’