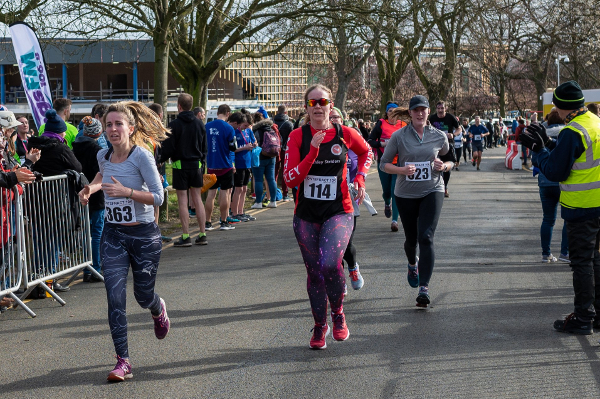 There was much to be proud of at Sunday’s (8 March) Pontefract 10K with outstanding volunteers, Autism awareness T-shirts and local support. For one participant, the race was an opportunity to show that anything is possible.

Back for a third year and with the team who organise Pontefract Half Marathon in charge, the aim is to put this historical town on the running map.

Organisers made a change to the original 10K route that required runners to complete a loop before heading back to Pontefract Park. Conditions were spring-like with blue skies and sunshine as they set off at 9.30am from the Park along an undulating to hilly course. They were helped by more than enough encouragement to go around.

Andrew Humphries of Airecentre Pacers was the winner in 34:08 – only four seconds separating him and Wes Taylor who was second in 34:12. Daniel Grant of Valley Striders came third in 35:44.

If there was a prize for sheer determination it would go to Ismail Patel (Charlie) of Dewsbury Road Runners. Over 10 years ago he developed a life-threatening condition called arteriovenous malformation on the brain that left him paralysed on his left side and having to use a walking stick. The Batley man resolved to get back to work and fitness and has completed numerous 10K races since then as part of his ongoing rehabilitation. Inspirational Ismail crossed the line in 1:51:31.

The blue finishers T-shirts made an eye-catching sight and the replacement medal was appreciated by many.