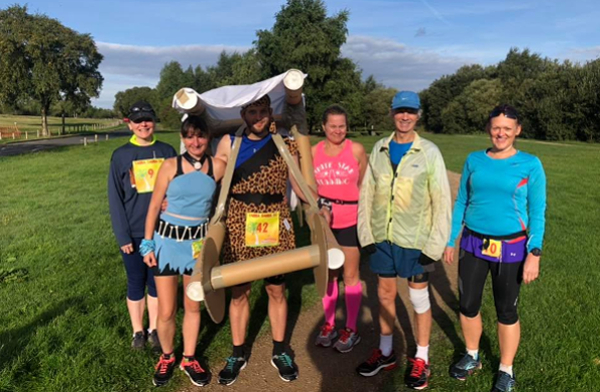 Fred and Wilma made a special journey from Bedrock to Chasewater Country Park for Saturday’s Yabba Dabba Doo where they propelled themselves around a multi-lap course in modern day Staffordshire.

The Flinstones-inspired pair and their ‘footmobile’ were amongst runners taking part at the second year of this great event from How Hard Can It Events & CODRC. Race director Denzil Martin is famous for his themed races and accompanying ‘bling’ and Saturday’s two offerings didn’t disappoint.

There was a choice of four distances: 5K, 10K, Half Marathon and Marathon which were held on a 3.3 mile route around the reservoir. A slight change to the course meant a rearrangement of the distance, from 3.1 to 3.3 miles. Each lap was recorded by smiling volunteers who supported everyone’s efforts.

Your correspondent was amongst 44 finishers including Fred and Wilma in the marathon as we completed lap after lap on a flat course comprised of pathways and hard stone trails plus two railway crossings. All the entrants started en masse at 10am and continued in an anti-clockwise direction in this picturesque location.

Every runner rang a bell when they completed their chosen distance before being presented with a pink ‘Dino’ or yellow ‘Flinstone Family’ medal and a chocolate cupcake. They were applauded by fellow entrants and volunteers with the biggest cheer reserved for Fred and Wilma.

Check out runABC Midlands race listing for the race results.