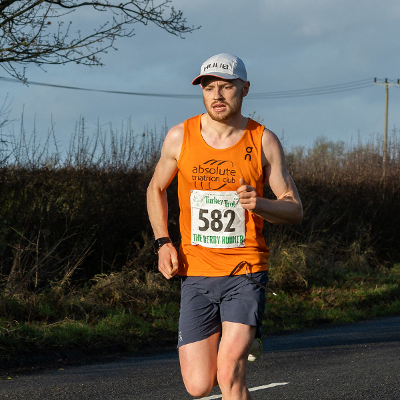 It was second time around for Jimmy Kershaw who successfully defended his title at Sunday’s (8 December) blustery Keyworth Turkey Trot Half Marathon. He was like a whirlwind as he crossed the line.

A distinctive sight in his bright orange club vest, the U23 Elite triathlete was in commanding form as he led the race on a hilly course made harder by the windy conditions. Kershaw won the 2018 race in 1:12:32 with a gap of two minutes between him and the runner-up and he returned to Keyworth hoping to do the same.

Over 930 runners started from South Wolds Academy and Sixth Form and headed out on a single undulating loop – all on roads - past villages nd through attractive countryside in the South Nottinghamshire Wolds.

Jimmy Kershaw of Absolute Tri was out in front and continued on his way before racing to the finish to win the 2019 Keyworth Turkey Trot in 1:10:12 – a PB by two and a half minutes. Rob Payne of Caistor Running Club was nearly three minutes behind, finishing in 1:13:01. Bruce Raeside of Notts AC was third in 1:13:26.

The Keyworth Turkey Trot Half Marathon is known as a tough one and Sunday’s event lived up to its reputation. Organised by the 1st Keyworth Scout Group Executive with all proceeds helping to support their activities and chosen charities it is both challenging and rewarding. Many runners return each year mainly because of the course and it is well-supported by the local running community and residents.