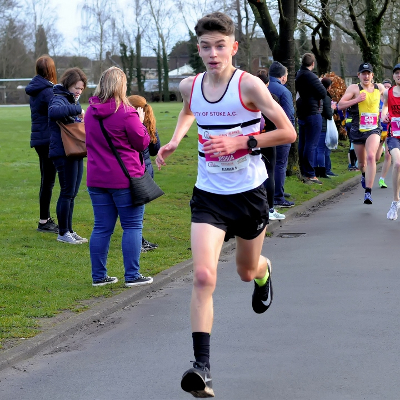 Talented Stoke teenager Joshua (Josh) Lally turned lockdown restrictions into a positive when he ran the equivalent of the elevation of Ben Nevis on a treadmill. Now Josh's efforts to raise funds for Age UK have been recognised with a nomination for the Stoke Sentinel/StokeonTrent Live ‘Our Heroes’ award.

Josh trains at City of Stoke AC on a regular basis where he is coached by Kevin Hendricken. He showed an impressive turn of speed at this year’s Alsager 5 where in a top quality field, he posted 27:54 and is a strong performer in athletics and cross country.

Josh is equally at home on the hills. He attended several hilly cross country group sessions over the winter at Keele University, organised by John Danahay of High Performance Runner (HPR). These plus his outstanding treadmill run in the HPR 30 minute Hill Challenge proved to be good preparation for his charity challenge.

Josh had been ready to undertake the Duke of Edinburgh Three Peaks Challenge but this was cancelled due to the coronavirus outbreak. However, he was determined to fundraise for Age UK in gratitude for the support given to his grandmother and decided to run the elevation of Ben Nevis on a treadmill. He also created a JustGiving page with a target of £500.

The treadmill was set at an incline to replicate the climb as closely as possible. Josh completed the equivalent of the 4,413ft ascent in one hour 14 minutes and smashed his fundraising target, raising £710 for Age UK Coronavirus Emergency Appeal.

His selfless actions have resulted in him being nominated for an ‘Our Heroes’ award, in the Bright Young Thing category organised by The Stoke Sentinel/StokeonTrent Live.