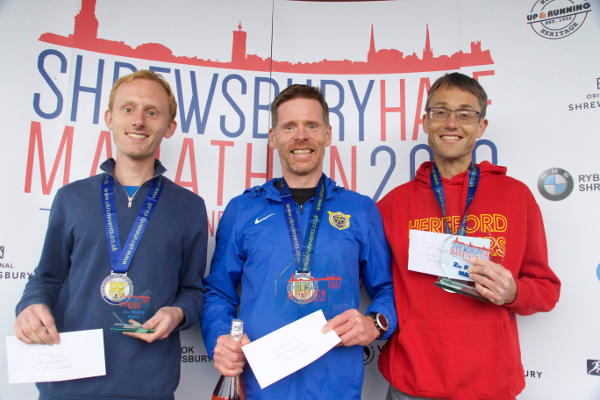 Paul Jones and Sophie Birtles took the top spots at Sunday’s (17 June) Shrewsbury Half Marathon. It was also survival of the fittest as over 1,500 runners battled up Wyle Cop.

Shrewsbury Half Marathon has evolved to become one of the most popular races in Shropshire and this year was no exception with a record turnout of entrants. The field included club athletes, charity runners and those making their debut at this distance. Many people travelled from across the UK to challenge themselves on a scenic route around this medieval town.

Dry and overcast conditions formed the backdrop to a successful race which started at 9am from the Shropshire County Showground. There was a team of pacers from UKRunChat to help runners achieve a PB and enthusiastic support from the local community.

Children aged 4 to 11 ran the final 1.1 mile of their cumulative half marathon the day before the main event. They had completed 12 miles over several weeks/months as part of the Shropshire Primary Schools Challenge and were cheered on towards the finish by proud parents and teachers. They were presented with a medal as well as a bright orange t-shirt for their efforts.

Race Director Joe Williams was fulsome in his praise for everyone who helped to make the 2018 Shrewsbury Half Marathon 'the best event to date'.