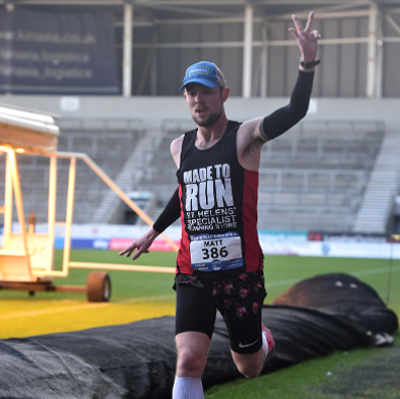 Classy Crehan makes it three in a row at St Helens

Made to Run’s Matthew Crehan showed he was made to win as the course record holder won for the third consecutive year at St Helens 10K Run on Sunday (1 March). Matthew showed his generous side by supporting the other runners after he had finished.

A co-owner of specialist running store Made to Run, Matthew Crehan is St Helens born and bred and his passion for the town and community was in evidence on Sunday. He was ready to defend his title as he toed the line with over 1,800 participants at the 10th GPW Recruitment St Helens 10K Run.

The Steve Prescott Foundation was the official charity partner and mascot ‘Precky the Panther’ joined runners to commemorate the race’s 10th anniversary. The Foundation is the legacy of rugby league star Steve Prescott MBE who passed away in 2013 from a rare form of stomach cancer at the age of 39. He embarked upon a series of challenges during his illness to fundraise for this charity and created the St Helens 10K in 2011.

St Helens is a proud rugby league town and the Totally Wicked Stadium – the home of ‘The Saints’ - was the venue for the start and finish. The course included the challenging North Road that didn’t pose a problem for Matthew Crehan as the St Helens Sutton AC man raced to victory in 31:26. He then ran back along the course where he high fived Craig Tessyman and encouraged others as they continued to the end.

The runners efforts raised £600 for rugby league’s Mose Masoe who suffered a career ending spinal injury but is determined to walk again.