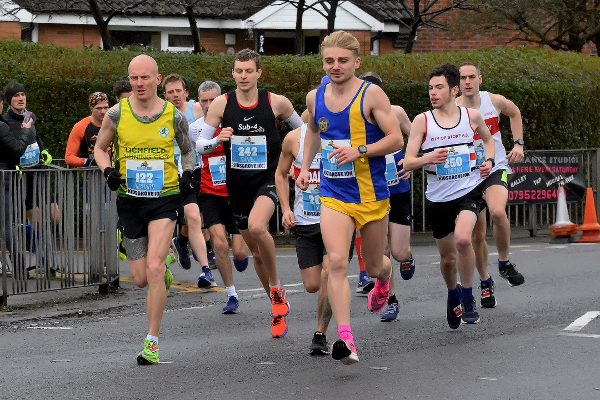 Staffordshire's Kidsgrove 10K returned after a period of absence with an interesting new format that generated lots of interest and opinion. Separate men’s and women’s races was the unique selling point for the revived event.

The new format enabled couples to enter as it fitted in with their childcare arrangements and the staggered start times also helped in that respect with the men setting off at 10am followed by the women at 11.20am.

The 10K was held on an ‘undulating’ course around Clough Hall Park that proved to be tougher than originally thought with the team from PB Pacers helping many of the participants to their target time in spite of the inclines. Plenty of local support along the way was also appreciated.

In the all men's race, Sub-4 sponsored athlete Daniel Soltys, who had a strong 2019 with several wins, was hoping his good form would continue at the start of this year’s race season. Joining him was Jamie Lambie of Shrewsbury AC who was alongside Soltys from early on. The pair raced neck and neck around the testing course until near the end when Lambie pulled away to win in 33:03.

Soltys of Stone Master Marathoners followed him in 33:11 and Carl Moulton of Boalloy RC third in 34:14.

Amy Grace of South Cheshire Harriers won the women’s race in 40:04. Lisa Ho of Newcastle (Staffs) AC was second in 42:19 and Helen Harrington of Vale Royal AC third in 42:54.

266 runners finished at this well-organised event from Mick Hall and team and received a bespoke medal for their hard work and efforts. Organisers thanked Stoke FIT, Andrew Vickerman and others for the help that contributed to a successful day.