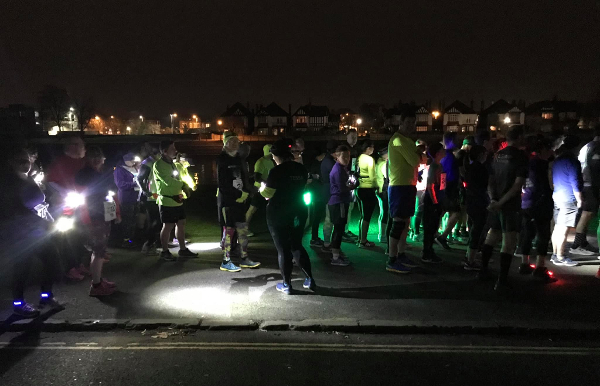 A shining happy group of runners took advantage of the mild weather and a flat course at Wednesday night’s (8 January) Nottingham Winter Series 5K – Race 3. They began as they meant to go on at this penultimate race in the series.

The Nottingham Winter 5K Series was created in response to the success of the Summer Series – both organised by Nice Work. They have proved to be a winner with novice and experienced runners alike. These four races are held on a flat out and back route along the Victoria Embankment and the evening start is feasible for people leaving work.

Races 1 and 2 took place on 6 November 2019 and 4 December 2019 with the remaining two scheduled for 2020. The first 100 male and female finishers are awarded points based upon their race positions and these count towards the overall Series prizes. The best three races count towards the final results.

Conditions were dry and temperate as runners in high viz and head torches mingled by the Memorial Gardens, waiting for the race to begin. They set off at 7.30pm along the promenade and back and were presented with a medal and goodies at the finish.

Ben Cummings was first across the line in a swift 17:12 followed by Pierre-Alain Bouffandeau in 17:55. Simon Barnes of Beeston AC was third in 19:45.

Another Beeston AC runner Caitlin Bradbury was the first female in 20:43. Zoe Attenborough of Kimberley & District Striders was second in 21:58 and Shaz Wood of Doncaster AC third in 22:05.