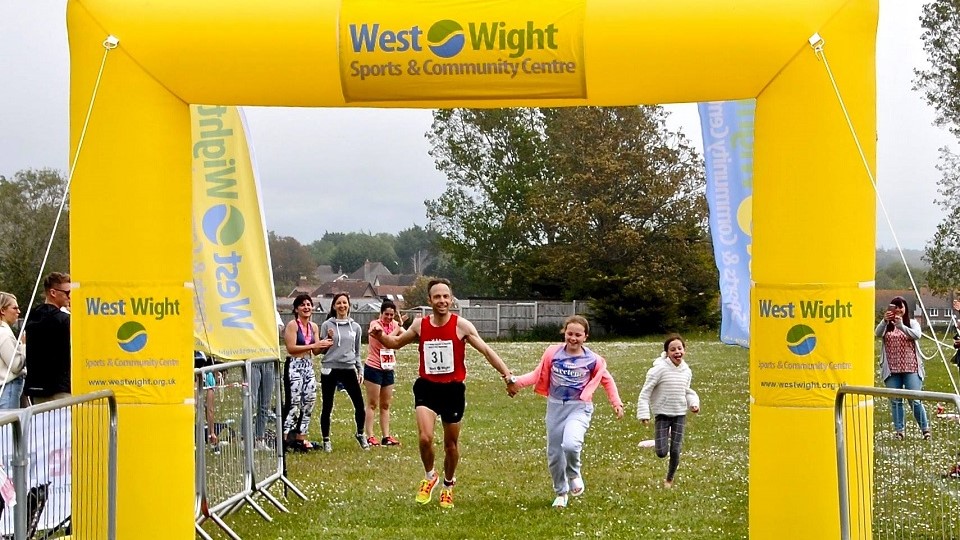 Isle of Wight Running Festival is a hit with 500 competitors

One of the toughest events on a packed and varied weekend of races was the Isle of Wight Festival of Running Needles XC Half Marathon on Sunday (6 June) won in fine style by M40 Gary Marshall (Ryde Harriers). The delightful image above shows Gary, from Newport, joined by his excited daughters as he celebrates his victory in 1:19:25.

There were 365 finishers in 3:42:38 and the local winner enjoyed a comfortable margin over Francesco Melloni (London Heathside, 1:23:35) and Joe Driscoll (1:27:26) who stepped up in class and distance after being a regular at Winchester parkrun for a number of years.

W45 Valeria Sesto (New Forest Runners, 1:36:17) – formerly from Argentina – was almost as dominant in the women's race as she finished strongly ahead of Helen Sceales (1:39:54) and Poppy Tanner (Hardley Runners, 1:45:19). The winner was certainly not lacking in stamina as she was second female and eighth finisher overall in the 35th annual Barry 40 mile track race in 5:18:12 just two weeks earlier.

Further down the field were married couple Hazel and Matt Jones (2:50:57) from Newport, IOW. Prior to the race, Hazel had posted on Facebook: "We will be celebrating our 12th wedding anniversary on Sunday with a special 'date run'. Matt is a much faster runner than me, but he will run with me". It seems Matt knows which side his bread is buttered as they ran and finished together!

Among the many favourable comments on social media were these from Alison Critchley: “Thanks for organising a great event - my goodness that was tough! Fantastic encouragement all the way round was the only thing that kept me going!”, and from Steve Hurn: “Another thoroughly enjoyable event and the Marshals were amazing as always. Look forward to my annual pilgrimage from Gloucestershire again next year”.

Image: Isle of Wight Festival of Running on facebook