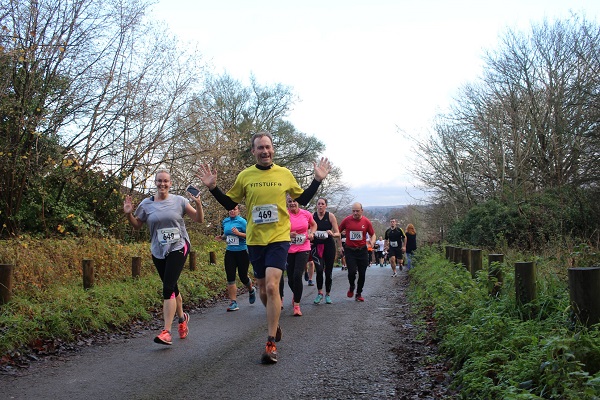 Trace a hog at Hogs Back race

Tech-enabled runners will be tracing the shape of a hog at the 59th Hogs Back road race on Sunday (8 December). The original event was named after the eponymous hilly ridge on the North Downs in Surrey but the current route will produce a porker-shaped trace on Strava (other devices are available).

This classic, award winning event has been revamped in recent years and is promoted by Guildford and Godalming AC. Typically up to 1,000 runners compete and last year there were 980 finishers in 1:44:18, with 350 of those inside an hour.

Based at the beautiful Loseley Park Estate, near Guildford, course features include the Tudor Manor House grounds of Loseley Estate and the near 200m ascent of The Mount, with some fabulous views across the North Downs – weather permitting. This is followed by a rapid descent past Watts Gallery to finish back in Loseley Estate, beside Withies Pub. The quirky race distance is 11.4K and there is a short section of gravel track to traverse.

Times under 40 minutes are the exception and after two consecutive victories for John Sanderson, last year's winner was George Dollner (39:03), who kept the title within the grasp of the hosts. Guildford's Eleanor Harrison (44:13) took the women's title for a popular double for G&GAC. The hosts also took both team awards in a show of strength on home territory.

The race is Guildford and Godalming AC's largest annual fundraiser and has also raised substantial funds for a variety of local charities.

Entries may still available be via Primo Events here and if you are in any doubt regarding the scenery, here is a quote from Jane Austen from 1813 that might just tip the balance:

“Upon the whole it was an excellent journey and very thoroughly enjoyed by me; the weather was delightful, the greatest part of the day. To my capacity it was perfection. I never saw the country from the Hogs Back so advantageously.”